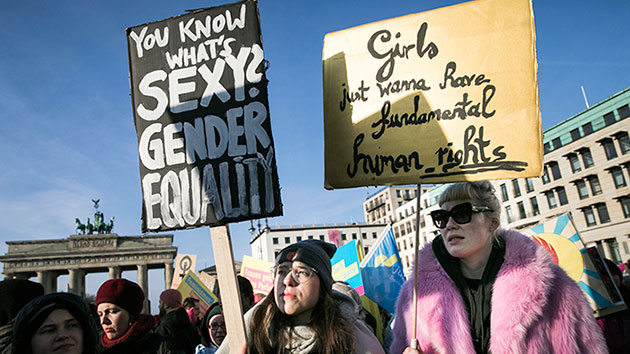 Carsten Koall/Getty Images(WASHINGTON) — For the third year in a row on Saturday, women across the world will protest in response to the Trump administration. But the Women's March of today is poised to look different from the Women's March of 2017.
The first Women's March was organized in response to the presidency of Donald Trump, and yielded a global movement. On the day after his inauguration, crowds marched across the U.S. in the largest single-day protest in U.S. history. But this year, the solidarity has rapidly given way to problems within Women's March Inc.'s leadership amid accusations of anti-Semitism and racism. As a result, the movement has become fractured. In New York City alone, there will be three different marches.
Echoing 2017, this year’s formal march will be held in Washington, D.C., although over 100 other marches are planned for cities around the world.
In Europe, the protests are already underway. Hundreds of Londoners took part in a "Women Demand Bread & Roses" protest, rallying in Trafalgar Square. In Berlin, women marched holding signs that said, "My body, my rules."

“Last year we brought the power to the polls, and this year we need to make sure we translate that power into policy,” Ocasio-Cortez added. “That means we will not let anyone take our rights away. In fact, we will expand them.”

In D.C., an hour before the event's start at 10 a.m., the crowd in Freedom Plaza remained sparse, with estimates in the low thousands. For comparison, the permit called for tens of thousands.
Pink "p—- hats" dotted the crowd, and protesters held up signs protesting President Trump and the GOP while others held signs in support of transgender rights, reproductive rights and gun control. Temperatures are just above freezing at 39 degrees Fahrenheit. Protestors also invoked Supreme Court Justice Ruth Bader Ginsburg and signs that read “Believe survivors.”
For months, women who had previously participated in the marches exchanged messages about whether one of the founders of the movement was anti-Semitic. In the week leading up to the event, the march drew as much attention for controversial comments made by the organizers as the upcoming event itself.
Though the conversation has been ongoing for the past year, the allegations were formalized in an article in the online Jewish magazine Tablet.
On Monday, two of the march's organizers appeared on The View, fueling the controversy. Co-President Tamika Mallory defended her relationship with Louis Farrakhan, the head of the Nation of Islam leader, who has long fielded charges of anti-Semitism.
“As a leader, as a black leader in a country that is still dealing with some very serious unresolved issues as it relates to the black experience in this country, I go into a lot of difficult spaces,” Mallory said on the show. “Wherever my people are, that’s where I must also be.”