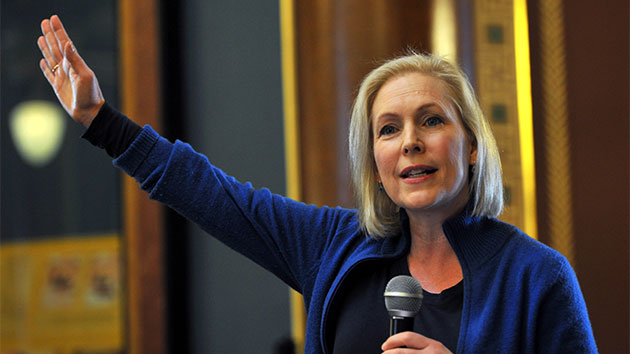 Steve Pope/Getty Images(DES MOINES, Iowa.) — New York Sen. Kirsten Gillibrand kicked off her 2020 presidential campaign in Iowa this weekend by tackling a controversial subject head-on and being a marquee speaker at the Women's March in Des Moines on Saturday.

Although the Democratic National Committee (DNC) and NAACP withdrew their support from the Women's March amid accusations of bigotry by some of the lead organizers, Gillibrand spoke at the rally in which the 14-degree weather pushed marchers into the Iowa State Capitol building, where she was swarmed before and after taking the stage.

“I will make this very clear. We know there is no room for anti-Semitism anywhere in our movement. We know this. We know that our movement is empowered when all of lift each other,” Gillibrand told the crowd, which was dotted with women wearing pink "pussy hats" and holding signs.

Her decision to speak at the march has garnered some criticism as two of the Women's March leaders have been accused of anti-Semitism, drawing scrutiny to the marches, which have become an annual global movement. Co-president Tamika Mallory’s ties to Nation of Islam leader Louis Farrakhan have come under fire.

During an appearance on "The View," Mallory did not condemn Farrakhan over his alleged anti-Semitic comments but said she didn’t agree with those statements.

Women's March board member Linda Sarsour drew criticism from Jewish groups when she told a magazine in 2017 that it would be impossible to be both Zionist and feminist.

"You either stand up for the rights of all women, including Palestinians, or none. There’s just no way around it," Sarsour told The Nation.

“Women built new organizations and led the resistance. Black women made sure that a credibly accused pedophile did not win in Alabama,” Gillibrand added, referring to the defeat of Senate candidate Roy Moore.

“Let us commit ourselves to this fight. The battle ahead is long. It is hard but it is worth it because everything you know and love is at stake do not give up. Do not grow weary," Gillibrand said.

The senator chatted with young girls who approached her, making small talk about school and sharing anecdotes about her sons.

The rally provided a national stage for the New York senator to speak about some of the issues she has confronted legislatively in the Senate.

“Despite that progress, women still do not represent 51 percent of elected leaders in this country. Imagine just for a moment what America would look like if it did. Imagine what would be possible. Do you think we would still be fighting tooth and nail for basic reproductive freedoms in this country? Do you think that we’d be hesitating to pass a national paid leave bill? Do you think it would be so hard to end sexual violence in our military, on college campuses and in society?“ Gillibrand said.

“The truth is, if we changed who is at the decision-making table, we would change everything,” she said.

Over the weekend, she also defended remarks she made about her ex-colleague, former Sen. Al Franken. She reportedly caught flack from her Democratic peers for calling on Franken to resign after allegations of sexual misconduct were raised against him.

At a Friday night event in Sioux City, Gillibrand was asked repeatedly about comments she had made about Franken, who resigned in December 2017 after multiple women accused him of touching them inappropriately. Gillibrand was the first Democrat to call for his resignation.

"I know it makes a lot of Democrats sad, some angry. But the truth is, Sen. Franken had eight credible accusations against him, for harassment and groping. They were corroborated in real time and they were deemed credible by those who investigated them," she said. "For me, that eighth allegation that came out from a congressional staffer, before he was senator, I couldn't remain silent anymore. Because what my silence meant was defending him."

Choosing to take the stage in Iowa, an early primary state, allows Gillibrand to get a head start on a presidential race that is expected to see a record number of women running for president.

“I’m going to run for president of the United States because, as a young mom, I’m going to fight for other people’s kids as hard as I would fight for my own,” she told Stephen Colbert earlier this week when she announced her run on an appearance on The Late Show.

She is also a vocal critic of President Donald Trump and voted against Supreme Court Justice Brett Kavanaugh’s confirmation.

Sen. Elizabeth Warren of Massachusetts and Gov. Tulsi Gabbard of Hawaii have also joined the race with other prominent women reportedly contemplating a presidential bid.