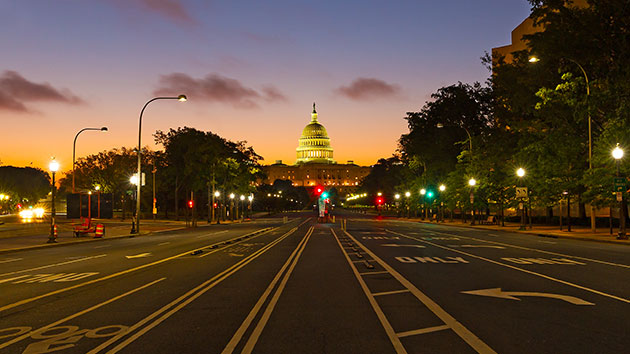 iStock(WASHINGTON) — The hundreds of thousands of federal workers who are either furloughed or working without pay are not the only ones reeling from the partial government shutdown.
Kings Floyd, who suffers from muscular dystrophy and epilepsy, is a federal worker who has been furloughed. That stop in pay meant she could not afford both her epilepsy medication and electric bill.
So Floyd said she went without her medication for several days — a gap that made it tough for her to function. She felt disoriented and even fell.
And, without income, she couldn't afford to pay the personal care attendants who rotate through and help her with daily tasks.
“These are five women in the D.C. community who are relying on me as a part-time income, and I’m saying, ‘Oh, I’m sorry. I can’t pay you,’” she said.
Eventually, her family was able to lend her some extra financial support — but that assistance doesn't cover all of her needs.
It's a tight position for both her and the attendants she can no longer pay, a problem she feels lawmakers are in a position to resolve.
She's not alone. Since the federal shutdown began, ABC News has spoken with dozens of people like Floyd and her assistants.
Below are the stories of non-federal workers struggling to keep their heads above the waves of the shutdown's ripple effect.
Cab drivers
“Before, we were working short hours — eight hours — but now it's working more than 14, 12 hours," said veteran D.C. cabbie Berhane Berhe. "Before, if you're working six hours, you're making $200, maybe $150. But now, to make that amount of money, you have to work long hours."
Fewer federal workers are hailing cabs to work and fewer tourists are coming to town for federally funded museums such as the Smithsonian.
This means less income for taxi drivers.
And when they do work, they don't make much money.
"Yesterday, for 12 hours, I made $120," Berhe said.
But his fuel expense was about $20. Add to that the cost of vehicle maintenance, insurance and the fees he pays for the credit card system in his car, and his take-home pay is even lower.
"It's painful," he said.
Berhe has worked a cab in Washington for nearly 25 years. And he has driven through several government shutdowns.
But he said he has never felt the impact so acutely.
If the shutdown persists, Berhe may look for other work to keep up with his mortgage.
"If you keep it like this for a long time, I have to," Berhe said.
Child care
For Raechell Redmond, director of the Milestones Enrichment Center in Washington, the shutdown has meant the federal subsidies for child care and food assistance her business depends on to keep staff paid and kids fed in the upcoming weeks haven't been approved.
The center services 46 families, 35 of whom receive federal subsidies. Her facility provides breakfast, lunch and snacks for children every day through a Food and Drug Administration grant.
Without that funding, Redmond said already financially strapped parents may have to start providing food for their children.
As a preventative measure, Redmond has had to reduce hours for her staff.
And if the shutdown continues and subsidies aren’t paid, she said her business will be unable to continue.
Kids also feel the emotional impact of the furlough, Redmond said.
Younger children in her program are reverting to behaviors that they learned as babies — clinging to parents more, confused why their parents aren’t rushing to work in the morning, instead of dropping them off in casual clothes since they aren’t going to work.
Parents are now picking up their children earlier in the afternoon, oftentimes before recess, Redmond said. The change in schedule has been noticed by children who wonder why their parents aren’t allowing them to play with their friends.
Some children look at the early pickups as a sort of punishment.
“Sometimes the parents are a little sad because they want them to come with them. But no, they want to play with their friends.”
Food trucks
In D.C., the wintry weather has made it a tough start to the year for food trucks — normally a staple for tourists and locals looking for fun, quick meals in the city.
The furlough has made it even tougher.
Doug Povich, who owns Red Hook Lobster Pound, has been in business for over eight years. He knew winter would provide some difficulties, and has described the season as the “worst time of the year for trucks and restaurants.”
Povich, like many of his colleagues in the food truck business, wasn’t able to save a rainy day fund to get through the winter. The shutdown caused his business to decrease nearly 34 percent compared to January 2017. Because of the dip in business, he’s had to temporarily furlough two of his staffers until the shutdown ends.
“It's an ugly picture," he said. "I'm digging into my savings to try to make ends meet."
Povich told ABC News that paying his employees is very important to him, so he has made changes at home. He and his wife are not going out to dinner, going to the movies is out of the picture, and he has even changed his cat’s food in an effort to save money. "It’s pretty dire.”
Copyright © 2019, ABC Radio. All rights reserved.