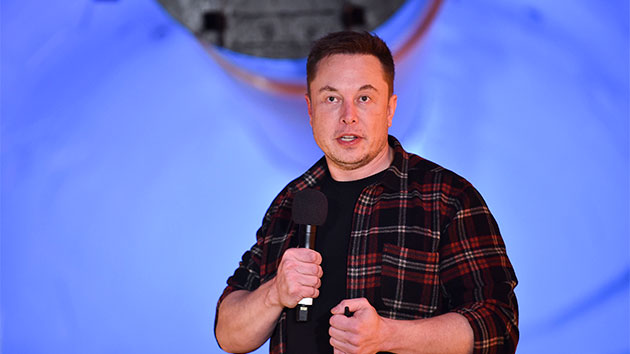 Robyn Beck-Pool/Getty Images(NEW YORK) — Tesla announced on Friday that it will cut 7 percent of its workforce, marking the second round of job cuts in just over six months, as it faces the pressure of building and delivering its long-promised, lower-priced Model 3s at scale while keeping costs down.

The news comes just one week after CEO Elon Musk announced layoffs of 10 percent at his other company, SpaceX, in an all-hands meeting, which was first reported by The Los Angeles Times.

"We, unfortunately, have no choice but to reduce full-time employee headcount by approximately 7 percent (we grew by 30 percent last year, which is more than we can support) and retain only the most critical temps and contractors," Musk wrote in an email to employees delivered at 1:20 a.m. Friday morning. It was later posted on the company's website. In October, Musk tweeted the company had about 45,000 employees, so the cuts would eliminate about 3,150 jobs.

"Tesla will need to make these cuts while increasing the Model 3 production rate and making many manufacturing engineering improvements in the coming months. Higher volume and manufacturing design improvements are crucial for Tesla to achieve the economies of scale required to manufacture the standard range (220 mile), standard interior Model 3 at $35k and still be a viable company. There isn't any other way," Musk wrote.

The electric carmaker laid off 9 percent of its staff last June.

Tesla is facing several market conditions that are challenging for the company itself, the electric vehicle industry in general and the auto industry at large. It is certainly not the only automaker laying off workers in significant numbers: GM will lay off 15 percent of its workforce and close factories, with about 14,000 employees in North America losing jobs by the end of the year. Ford is also making global job cuts in the thousands, as it eliminates product lines, particularly in Europe. Jaguar Land Rover will also cut almost 5,000 jobs, and Nissan is also making layoffs.

In the meantime, Tesla faces increasing competition in the luxury space, as traditional brands plan to enter the electric market, including Daimler's Mercedes-Benz, BMW, and Volkswagen's Audi and Porsche.

Musk needs to find a way to mass produce and deliver the lower-priced Model 3s he has staked the company's future on — an affordable mid-range electric car priced at $35,000. Tesla began taking deposits for the car three years ago and has yet to deliver at that price point. Currently, the cheapest Model 3 sells at $44,000. Furthermore, Tesla hopes to deliver Model 3s to Asia and Europe in the next three months.

“It has always been hard to make affordable electric cars, that’s why all car-buyers and tax-payers have to subsidize them through taxes and government incentives," Brian Moody, Autotrader's executive editor, wrote in an email to ABC News. "Tesla should never have promised affordability in the first place. The real future for EVs is luxury cars like the Jaguar I-Pace and automated delivery and taxi services."

"Starting around May, we will need to deliver at least the mid-range Model 3 variant in all markets, as we need to reach more customers who can afford our vehicles. Moreover, we need to continue making progress towards lower-priced variants of Model 3," Musk wrote.

"The need for a lower priced variants of Model 3 becomes even greater on July 1, when the US tax credit again drops in half, making our car $1,875 more expensive, and again at the end of the year when it goes away entirely," he added.

The electric vehicle tax credit applies to all manufacturers for their first 200,000 vehicles. After that threshold, it's halved, and then halved again before it is phased out. Therefore newer entrants to the market can defray costs for consumers by $7,500, potentially swaying buyers to Tesla's competitors. Earlier this month, Tesla dropped the price of all of its vehicles by $2,000.

Musk's email was markedly somber in tone compared the fiery tweets he's become known for — and which cost him and the company each $20 million in settlements with the Securities and Exchange Commission last year. Musk had been sued for fraud and misleading investors about taking the company private.

Friday's email confirmed many external criticisms of the company.

"This announcement is a rare moment of concession for Tesla, where the company is officially acknowledging the fact that Model 3 buyers actually do care about the tax credits, and could insinuate that demand for the vehicle is starting to wane," Jessica Caldwell, an executive at auto research firm Edmunds, wrote in an email to ABC News.

"This is clearly big news because it’s Tesla, but it’s not unlike moves we’re seeing from other automakers as costs rise and competitive pressures increase. But when you’re talking about a company that builds tents to solve production challenges, it’s almost more notable when you see them doing something conventional," Caldwell wrote.

The company has been struggling to be profitable its entire existence. In October, it reported a record third-quarter profit of $311.5 million, reversing Wall Street expectations. Musk referred to that 4 percent as "our first meaningful profit in the 15 years since we created Tesla." Musk credited the higher-priced Model 3 sales.

Within Tesla's own ecosystem, Tesla has been struggling from both production and delivery issues, which Musk admitted in a tweet last year, saying the company had gone from "production hell to delivery logistics hell."

Tesla shares dipped dramatically on Friday, down 13 percent to $302.