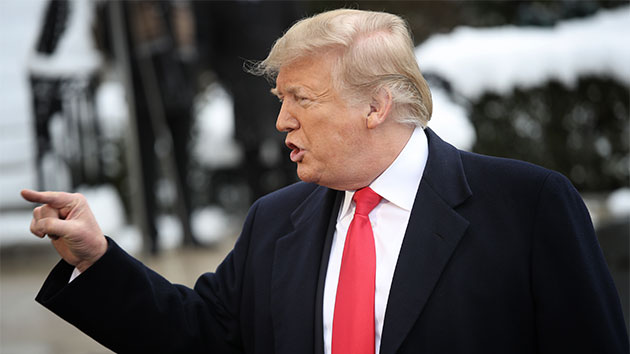 Win McNamee/Getty Images(WASHINGTON) — President Donald Trump tweeted Friday evening that he will be making a "major announcement" relating to the government shutdown and the United States’ southern border with Mexico on Saturday at 3:00 p.m. from the White House.

The announcement comes as the longest government shutdown in U.S. history approaches a month in length.

Asked in a conversation with reporters at the White House Friday evening if the announcement related to declaring a national emergency to use funds to construct a border wall, White House Press Secretary Sarah Huckabee Sanders declined to specify what exactly the announcement would entail.

I will be making a major announcement concerning the Humanitarian Crisis on our Southern Border, and the Shutdown, tomorrow afternoon at 3 P.M., live from the @WhiteHouse.

The president's promised announcement comes amid an acrimonious back-and-forth with Democratic leaders over the protracted government shutdown and funding over his long-desired border wall.

The bitter words continued Friday. House Speaker Nancy Pelosi, whose official trip overseas on a military aircraft was abruptly blocked Thursday by President Donald Trump, accused the president and his administration of leaking her plans to possibly fly commercially instead and endangering lives as a result.

"After President Trump revoked the use of military aircraft to travel to Afghanistan, the delegation was prepared to fly commercially to proceed with this vital trip to meet with our commanders and troops on the front lines. In the middle of the night, the State Department's Diplomatic Security Service provided an updated threat assessment detailing that the President announcing this sensitive travel had significantly increased the danger to the delegation and to the troops, security, and other officials supporting the trip," Hammill said.

Due to "grave threats" the delegation decided to postpone the trip, Hammill said.

The White House called the assertion a "flat out lie."

Meanwhile, hundreds of furloughed federal workers waited on Friday to get free food at a pop-up kitchen on Pennsylvania Avenue — not far from the White House and Capitol — on Day 28 of the longest-running government shutdown. A similar scene played in cities such as Atlanta.