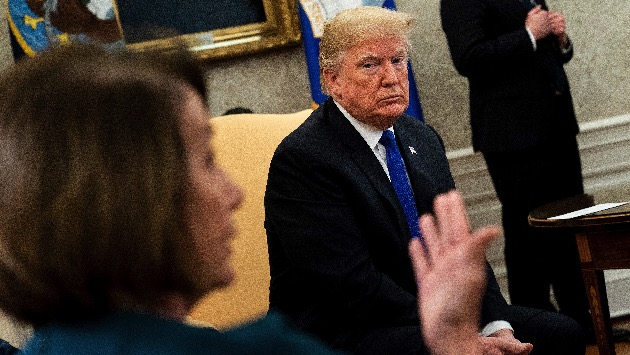 BRENDAN SMIALOWSKI/AFP/Getty Images(WASHINGTON) — The longest-running government shutdown, now on Day 28, is ruining plans.
Not just for the hundreds of thousands of furloughed workers, but also for House Speaker Nancy Pelosi, whose official trip overseas was abruptly blocked Thursday by President Donald Trump. And flying commercially will no long be an option either, Pelosi's spokesman Drew Hammill said in a statement Friday.
"After President Trump revoked the use of military aircraft to travel to Afghanistan, the delegation was prepared to fly commercially to proceed with this vital trip to meet with our commanders and troops on the front lines. In the middle of the night, the State Department's Diplomatic Security Service provided an updated threat assessment detailing that the President announcing this sensitive travel had significantly increased the danger to the delegation and to the troops, security, and other officials supporting the trip," Hammill said.
Due to "grave threats" the delegation decided to postpone the trip, Hammill said.
Trump's border wall is still on his mind, as he tweeted about "prayer rugs" and a "big Caravan" at the U.S.-Mexico border Friday morning.
"Why would Nancy Pelosi leave the Country with other Democrats on a seven-day excursion when 800,000 great people are not getting paid," Trump tweeted. "Another big Caravan heading our way. Very hard to stop without a Wall!"
The president has no negotiations scheduled with Congressional leaders Friday, but has been meeting with bipartisan groups of lawmakers throughout the week.
Here's a look at the effects.

Pelosi's trip postponed
In the increasingly personal standoff between President Donald Trump and House Speaker Nancy Pelosi, the president on Thursday announced he had postponed Pelosi's official trip to Belgium and Afghanistan – cutting off her access to military aircraft – in apparent retaliation for Pelosi asking Trump to delay his State of the Union Address until after the government shutdown ends.
"Due to the Shutdown, I am sorry to inform you that your trip to Brussels, Egypt, and Afghanistan has been postponed," Trump wrote in a sharply-worded letter released Thursday afternoon, the latest move in a memorable display of Washington political theater. "We will reschedule this seven-day excursion when the Shutdown is over."
Trump added that he feels “it would be better” if Pelosi was in Washington negotiating with him “and joining the Strong Border Security movement to end the shutdown."

Diplomats called back
The State Department announced Thursday it was calling back nearly all staff next week and paying them for a two-week period, but a growing number of U.S. diplomats are frustrated by the partial government shutdown and the damage it's inflicting on their jobs and America's standing abroad.
While they’ll be paid for this pay period, several diplomats are calling on the administration to fully reopen the government, as they struggle to interact with counterparts abroad and pay their own bills. Employees have been either furloughed and sent home or are working with no pay and limited in what kind of work they can conduct.
"Morale is pretty rock bottom," said a Foreign Service officer based in Europe, "And this is among a really dedicated, really patriotic bunch of people who are unfortunately getting these messages that what they’re doing is not important or that they’re not valuable enough to have somebody figure out how to get them paid."

While many families were enjoying Christmas, an undercover FBI agent was communicating with a man who was suspected of plotting an attack on the White House, court documents show.
It was days after the government initially shut down and the agent was not getting paid. But the work resulted in the arrest of Hasher Jallal Taheb, a man in Georgia who federal authorities accused of plotting to attack several prominent locations in Washington, including the White House.
And now as the partial government shutdown is in its fourth week, federal employees are furloughed or not receiving pay for the work they are doing.
Copyright © 2019, ABC Radio. All rights reserved.