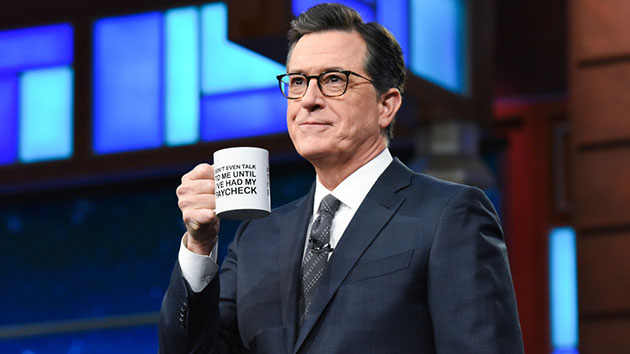 That's the deal host Stephen Colbert announced last night on The Late Show. He started by noting that celebrity chef José Andrés had opened a relief kitchen in Washington, D.C. to feed furloughed government workers, and anyone else in need of a meal, for free — to the tune of up to 200,000 meals a day.

Colbert then played footage of a joke from Wednesday night's show, during which he noted President Trump's order for thousands of federal workers to return to their jobs without pay. Colbert then showed what he called a "shutdown coffee mug" emblazoned with the words "Don't even talk to me until I've had my paycheck," and then remarking, "Can we sell these?"

"So we're selling these," Colbert said Thursday after playing the Wednesday footage. "Go to ColbertLateShow.com/ShutdownMug to get one. 100% of The Late Show's profits benefit World Central Kitchen to help José Andrés' team feed federal workers during the shutdown. Get a mug!"