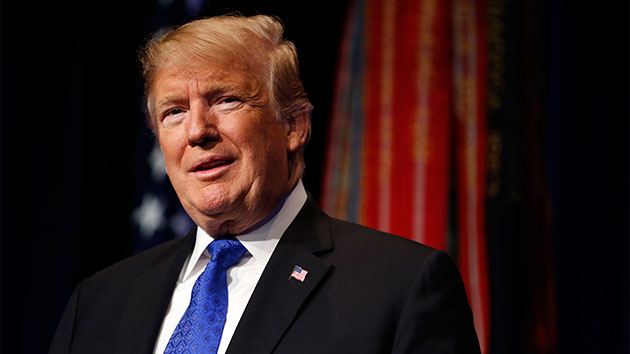 The article, posted Thursday night on BuzzFeed, suggests that President Donald Trump directed Michael Cohen, his former personal attorney and fixer, to lie in his testimony to Congress and that special counsel Robert Mueller has evidence to support that claim.

“BuzzFeed’s description of specific statements to the Special Counsel’s Office, and characterization of documents and testimony obtained by this office, regarding Michael Cohen’s Congressional testimony are not accurate,” special counsel spokesman Peter Carr said Friday evening in a brief statement to ABC News.

In a tweet late Friday night, President Trump criticized both the news organization's journalistic work and the broader Russia probe.

"Remember it was BuzzFeed that released the totally discredited 'Dossier,' paid for by Crooked Hillary Clinton and the Democrats (as opposition research), on which the entire Russian probe is based! A very sad day for journalism, but a great day for our Country!"

On Saturday morning, the president called the story "phony," and that he "appreciated the special counsel coming out a statement."

The story, he added, "was a disgrace to our country, to journalism."

BuzzFeed editor-in-chief Ben Smith stood by the organization's reporting on Friday, tweeting, "In response to the statement tonight from the Special Counsel's spokesman: We stand by our reporting and the sources who informed it, and we urge the Special Counsel to make clear what he's disputing."

It was a position he reiterated later during an appearance on CNN.

On Saturday afternoon, BuzzFeed released another statement defending the accuracy of its report.

"As we've reconfirmed our reporting, we've seen no indication that any specific aspect of our story is inaccurate. We remain confident in what we've reported, and will share more as we are able to," Matt Mittenthal, a BuzzFeed News spokesman, said in a statement released on BuzzFeed News' Twitter account.

“These allegations may prove unfounded, but, if true, they would constitute both the subornation of perjury as well as obstruction of justice,” Rep. Adam Schiff, D-Calif., chairman of the House Intelligence Committee, said in a statement Friday morning.

As part of his plea deal with Mueller, Cohen admitted that he made the misstatements about the Trump Organization’s “Moscow Project”, in an August 2017 letter to the House and Senate intelligence committees, which were conducting inquiries into alleged collusion between the Trump campaign and Russia.

ABC News has not confirmed the allegations in BuzzFeed’s story that Trump directed Cohen to lied to Congress.

The chairman of the House Judiciary Committee, Rep. Jerry Nadler, D-N.Y., joined Schiff’s call to investigate, pledging that his committee will “get to the bottom of it.”

Others went further. Rep. Joaquin Castro, D-Texas, tweeted late Thursday that Trump “must resign or be impeached” if the BuzzFeed report is proven truthful. And Sen. Chris Murphy, D-Conn., called on special counsel Robert Mueller “to show Congress his cards before it's too late for us to act.”

Much remains unknown about the plans for a Trump Tower in Moscow.

Cohen worked hand-in-hand with Felix Sater, a Russian-born business associate who scouted deals for the Trump Organization, to set in motion plans for a Trump Tower in Moscow. The two even conceived an idea to offer a $50 million penthouse in the prospective building to Russian President Vladimir Putin, a source familiar with the deal told ABC News.

The public first learned in the summer of 2017 that Cohen had been pursuing a deal to build a Trump Tower in Moscow even after his boss had begun to campaign for president.

At the time, Cohen told members of Congress the deal never progressed beyond an initial "letter of intent" and it was halted in January of 2016, before the Iowa caucuses.

But later, Cohen admitted in court that he made the false statements about the project “to be consistent with Individual 1’s political messaging and to be loyal to Individual 1.” Individual 1 was believed to be Trump, based on the description in court documents.

The president during the campaign denied working on any deals with Russia but tweeted late last year that he “lightly looked at doing a building in Moscow.”

Cohen was sentenced in December to three years in prison for financial crimes, lying to Congress, and for two violations of campaign finance law.

He’s scheduled to report to prison in early March, but he could have a busy month of congressional testimony before then.

He has already agreed to appear publicly before the House Oversight and Reform Committee on Feb. 7, and Schiff has expressed interest in bringing Cohen back to the House Intelligence Committee for an interview behind closed doors.

On Friday morning, Sen. Mark Warner, D-Va., vice chairman of the Senate Intelligence Committee, said “we expect to have him back… in February, we've got a lot of questions to ask.”