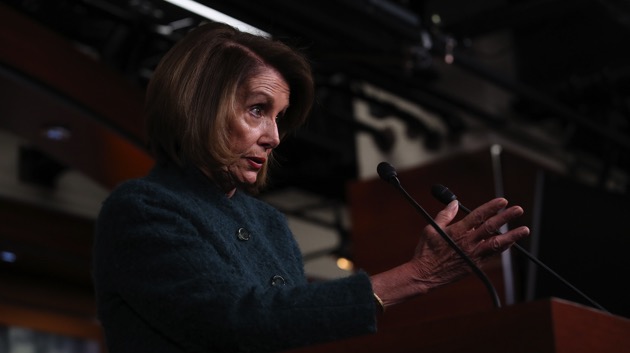 Win McNamee/Getty Images(WASHINGTON) — House Speaker Nancy Pelosi tried to salvage aspects of a congressional delegation to Afghanistan blocked by President Donald Trump, but was unable to continue the trip on commercial aircraft due to “increased” danger to officials on the trip, her spokesman said Friday.
In what was becoming an increasingly personal feud in their political standoff over Trump's demand that congressional Democrats agree to pay for his proposed border wall, the president on Thursday torpedoed plans at the last minute for the delegation to utilize a military aircraft to make the trip. The day before, Pelosi had called for a delay in Trump's State of the Union Address, scheduled for Jan. 29, until after the government shutdown ends.
But overnight before the rescheduled commercial flight, the State Department’s Diplomatic Security Service provided an updated threat assessment, “detailing that the President announcing this sensitive travel had significantly increased the danger to the delegation and to the troops, security, and other officials supporting the trip,” according to Pelosi spokesman Drew Hammill.
Hammill said that the White House also leaked plans for the delegation to continue on commercial travel.
"This morning, we learned that the Administration had leaked the commercial travel plans as well,” Hammill noted. “In light of the grave threats caused by the President’s action, the delegation has decided to postpone the trip so as not to further endanger our troops and security personnel, or the other travelers on the flights.”
A senior Pelosi aide pointed to “multiple administration” sources telling reporters Friday morning that the delegation would continue on commercial aircraft. ABC News was among those contacted.
Pelosi was still in her office in the U.S. Capitol when she received a letter from the president Thursday afternoon, where Trump announced he was postponing the excursion due to the shutdown. Trump suggested Pelosi fly commercially if she wished to continue her travel.
Friday morning, Trump continued to criticize Pelosi for scheduling the trip during the shutdown.
The partial government shutdown is now in its 28th day. The House of Representatives returns to session next Tuesday, likely ensuring the shutdown will continue through the long Martin Luther King holiday weekend.
Copyright © 2019, ABC Radio. All rights reserved.

From car crashes to plane delays, cicadas wreaking havoc by the billions
Caitlyn Jenner says she wants to be ‘a thoughtful disrupter’ like Trump
AG Garland defends DOJ decision to continue to back Trump in E. Jean Carroll defamation case
Police did not clear Lafayette Park area so Trump could hold ‘Bible’ photo op: Watchdog
Biden embarks on first foreign trip as president, including summit with Putin
Biden preps for first foreign trip as president, summit with Putin