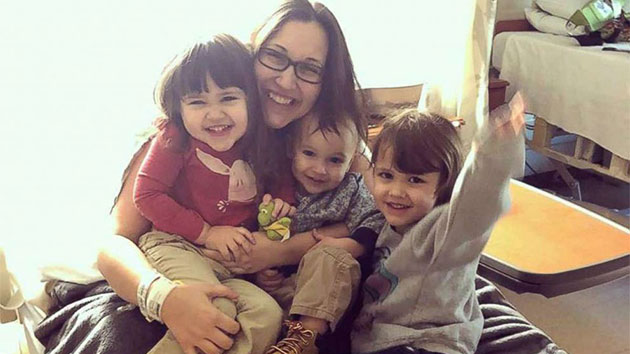 Rhiannon Lindley(WASHINGTON) — A woman who was diagnosed with cancer months after giving birth has received thousands of ounces in breast milk donations from fellow moms she's never met.

Rhiannon Lindley, 27, recently put a call out on her Facebook page asking for milk donations and the response "blew her away."

"It's hard to describe how wonderful it really is, all these women taking the time to feed my child," Lindley of Springfield, Missouri, told "Good Morning America." "She's strong and beautiful and healthy because of them."

At the time, doctors gave her a startling prognosis of three to four months to live, according to Lindley.

"Being told I only had a few months to take care of my children, my brother and my husband, I didn't accept it," Lindley said. "But being so horribly sick…I thought I was going to die. One night I was in the hospital, I sent a video home to my children and my husband saying goodbye, which was really hard."

Lindley said she was transferred to Barnes-Jewish Hospital in St. Louis, where she received chemo until November 2018, when she was released.

Mothers cannot breastfeed while receiving chemotherapy. The drugs are dangerous for nursing babies because "they interfere with the normal, healthy division of cells in the body," according to Memorial Sloan Kettering Cancer Center.

Although Lindley is now considered in remission, she must take chemo for the rest of her life, she said. Lindley breastfed all four of her children but said she had to stop at her youngest when she started chemo.

"I know all the medical benefits to breastfeeding, but for her it's also a comfort," Lindley said. "I didn't want her to have to give that up. Being sick I tried to keep things as normal as possible for my children."

Lindley started out small by reaching out to moms in her area who donated their breast milk. Then on Jan. 8, she shared a public Facebook post in hopes of expanding on her request, writing, "She has been drinking donor milk since my leukemia diagnosis and subsequent start of chemotherapy…If you know anyone willing to donate, please connect us!"

The post was shared nearly 9,000 times and Lindley said she received thousands of ounces of milk donations.

One month prior, Payne was pregnant with a little boy whom she named Ellison Isaiah, but during a Feb. 23 checkup, doctors could not find Ellison's heartbeat. Payne was induced, but Ellison did not survive.

Payne wanted to help fulfill Lindley's request, so she donated 250 ounces of her own breast milk.

"It's such a comfort to me after [Ellison's] loss knowing that I was able to give all of my milk to her," Payne, 25, told "GMA." "That's probably been the biggest blessing is seeing her daughter grow and thrive with the help of my son."

Payne has a 3-year-old son and is expecting a daughter. She hopes to donate more breast milk to a mom in need, she said.

"Women who have that big of a heart and care enough about my baby and my family to do that," Lindley said, "I don't even know how to thank them enough."