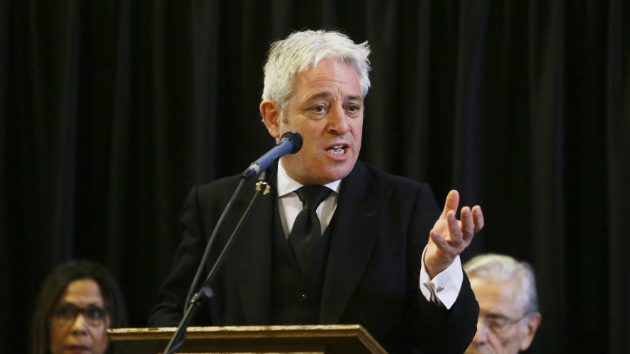 Alastair Grant – WPA Pool /Getty Images(LONDON) — If you've been watching the unfolding Brexit drama closely, you may be wondering who's the one man at the center of it all, whose eccentric style and witty put-downs you can't help but notice.
That man is John Bercow, speaker of the House of Commons, the British Parliament where lawmakers have been debating Brexit measures. Although he's an elected Member of Parliament, Bercow's role as speaker means he's a neutral figure, tasked with presiding over debates and deciding which MPs will have a chance to speak.
Bercow is an experienced operator, having served as speaker since 2009, but in the increasingly raucous House of Commons maintaining "order" is no small task.
But his time as speaker has not been without controversy, and this year his conduct has been put under the spotlight.
A parliamentary report into bullying at Westminster claimed Bercow had "tolerated and covered up" abusive behavior by MPs towards staff, which may lead to his departure from the role this summer, according to the BBC.
In December, a fight erupted when the leader of the Labour Party, Jeremy Corbyn, faced accusations of misogyny when he allegedly muttered "stupid woman" toward Theresa May under his breath. Conservative MP Vicky Ford claimed that Bercow, who's tasked with resolving such disputes in the House of Commons, had himself used the phrase, according to the Evening Standard.
Bercow also could become the first speaker to be denied peerage, a lifetime membership of the House of Lords, in 230 years, as the government seeks to punish him over alleged "bias" in the Brexit debates, The Times revealed on Jan. 18.
He may be controversial, but viewers can still look forward to his eccentric gesticulations for the time being, as Britain takes the next step on its long and winding journey out of the European Union.
Copyright © 2019, ABC Radio. All rights reserved.