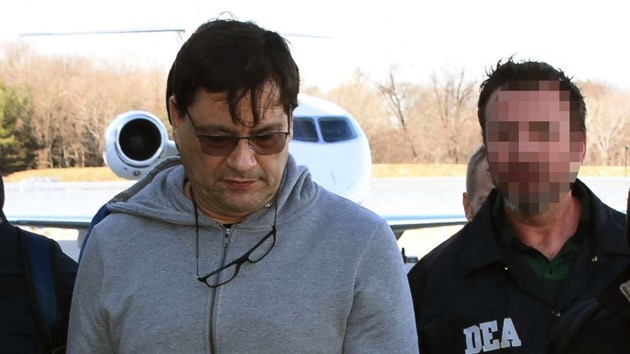 Obtained by ABC News(NEW YORK) — A Colombian described by federal drug agents as the country’s most significant drug trafficker in Africa has been arrested and brought to the United States to face charges of narcoterrorism conspiracy, according to a criminal complaint unsealed Friday.
David Cardona-Cardona arrived Thursday in New York where he was charged with arranging to trade cocaine for surface-to-air missiles and other advanced weaponry. He is due to appear in federal court on Friday afternoon.
Cardona allegedly needed to move the drugs into Europe and agreed to give the weapons to a terrorist group linked to al-Qaeda in exchange for use of the group’s smuggling routes through the Sahara Desert, the DEA said in the complaint.
“In particular, Cardona expressed a desire to provide the weapons to the organization Ansar al-Dine, and specifically indicated that the purpose of the weapons was to shoot down manned and unmanned aircraft belonging to the United States and other allied nations operating in West Africa,” the complaint states.
Cardona has been charged in the Southern District of New York with narcotics conspiracy, narcoterrorism conspiracy, firearms conspiracy and conspiracy to violate maritime drug enforcement laws. The case was brought by the DEA and an agent from Homeland Security Investigations.
The United States designated Ansar al-Dine a foreign terrorist organization in 2013. It operates mainly in Mali and cooperates with al-Qaeda in the Islamic Magreb, according to the State Department.
According to the criminal complaint, Cardona arranged the alleged drugs-for-weapons trade with two confidential DEA sources in Madrid, where he described years of drug trafficking through the Sahara Desert and working with Islamic extremists. He also mentioned access to a Gulfstream jet that could fly from Africa to southern Europe, according to the complaint.
“Cardona explained that he worked with a friend in Africa who has an aviation company using aircraft brought from the United States,” the complaint said. “Cardona agreed with the confidential sources that ‘our plan is … to try to do an operation with this plane.’”
Allegedly needing access to desert runways controlled by the al-Qaeda-linked extremists, whom he referred to as “barbudos,” or “bearded ones,” Cardona allegedly plotted with the confidential sources, a cooperating witness and an undercover Croatian law enforcement officer to ship them tens of thousands of dollars’ worth of surface-to-air missiles, .50 caliber rifles and night vision goggles using the same aircraft that delivered his cocaine to southern Europe, according to the complaint.
Copyright © 2019, ABC Radio. All rights reserved.