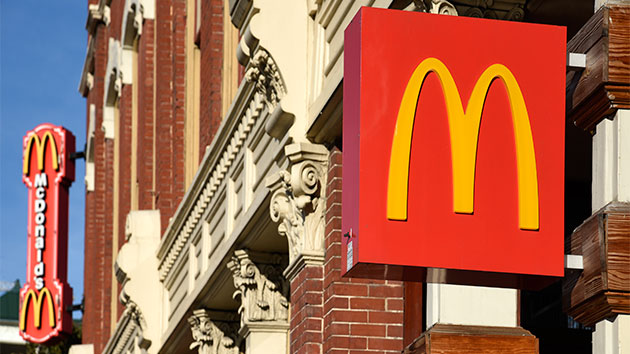 (NEW YORK) — Extreme weight gain in children is a dangerous mental and physical health epidemic in the United States, and public health officials have implored children and their parents to lay off the sugar-sweetened beverages, fast food and unhealthy snacks.

But according to a report released this week by the Rudd Center for Food Policy and Obesity at the University of Connecticut, the fight against obesity may not only be with the unhealthy food itself, but with the companies that advertise their unhealthy products to susceptible communities.

The authors defined “targeted” ads not by intention, but as those placed on programs in which black viewers comprised 50 percent or more of the audience and networks that were Spanish-language and viewed in Hispanic households — a calculation made by the marketing service Nielsen. The foods featured on these ads, the report said, tend to be high in fat, sodium and calories, and low in nutrition.

The study found that food companies, like McDonald’s and Pepsi, spent over a billion dollars from their marketing budgets on advertising that targeted black and Latino youth, a vulnerable group of people due in part to the lack of healthy food options in many of their communities. These foods, the report said, tend to be high in fat, sodium and calories, and low in nutrition.

Dr. Jennifer Harris, the report’s lead author and the Rudd Center’s director of marketing initiatives, told ABC News that the food companies reach these youth because they simply have more money.

“The [Centers for Disease Control and Prevention] budget for chronic disease prevention and health promotion is $1 billion a year,” Harris said. “These companies are spending $11 billion [on their ads].”

The study analyzed marketing data from 32 companies between 2013 and 2017. The companies included fast-food restaurants such as McDonalds and Wendy’s and packaged food brands like Coca-Cola, Nestle and PepsiCo, all of which have been associated with unhealthy outcomes if consumed in excess.

Children, taken altogether, watched 10 food-related ads per day, the study found. By comparison, black children watched 16 or more commercials from these companies. In 2017, black children and teens saw 86 percent and 119 percent more ads from these companies, respectively, when compared to white children and teens. Overall, nearly eight out of 10 ads viewed by black and Latino children were for unhealthy food products, compared to one in 20 for healthy products.

What’s more, as Coca-Cola and Nestle doubled spending on Spanish-language advertising between 2013 and 2017, the study found that advertisements for healthy products, such as water, fruit and nuts, had the least advertising.

Children who are obese are more likely to acquire metabolic diseases as they grow into adults, and these marketing efforts are effective, according to experts.

Anecdotally, she told ABC News about her own daughter requesting a cereal with a toy in it after viewing an advertisment. When Wootan asked her if she had tried the cereal, she said, “No, but I know I would like it.”

A National Academy of Medicine report on the influence of marketing on diet and health in youth found that “unhealthy food marketing puts children’s health at risk,” and noted that it impacted their nutritional beliefs, choices and practices, as well as psychosocial and physical problems associated with diet and weight.

Eating healthy foods helps people prevent the top causes of mortality in the United States, but access to them is a problem.

“Nutrition is one of the main contributors to the high rates of disease and health care costs in this country,” Wootan said. “It contributes to cancer, diabetes, high blood pressure and a lot of that is due to the food environment around people that pushes them to eat more unhealthy foods.”

These environments shape health disparities throughout the country, as those who are living in socioeconomically disadvantaged communities tend to lack access to healthier food options — areas known as food deserts.

“This study shows one of those big contributors — food companies — are disproportionately marketing the least healthy foods to children of color,” Wootan said.

Food companies, such as Kellogg’s, Hershey’s and Post, have already made modest changes to regulate their advertising. But these changes, part of the Children’s Food and Beverage Initiative (CFBAI) — which attempts to limit advertising for foods that don’t meet a certain nutritional criteria to children under 12 — are self-regulatory.

Although tobacco and alcohol aren’t legal for kids, their advertisements are heavily regulated on the state and national level. It’s likely that food advertising will require similar regulations in order to reverse the trends noted in the Rudd Center report, Harris said.

Until that happens, though, Wootan said parents can feel empowered to speak up about these issues.

“Parents have helped us to convince a number of companies to significantly reduce junk food marketing, but we’re not done and we need their help to finish the job,” she said.

Dr. Robin Ortiz is a physician in internal medicine and pediatrics, and a member of the ABC News Medical Unit.

Target Deal Days has arrived. Here’s what you need to know
On Juneteenth, descendants of America’s Black changemakers speak out about preserving ancestors’ legacy
Billy Porter says the theater industry marginalized him for being Black and queer
Black farmers fight to keep their land, cultivate next generation
Oprah says she wants to “show the other side of the narrative” by honoring Black fathers with TV special
Scarlett Johansson says she spent “about 10 years just waiting” for the ‘Black Widow’ movie