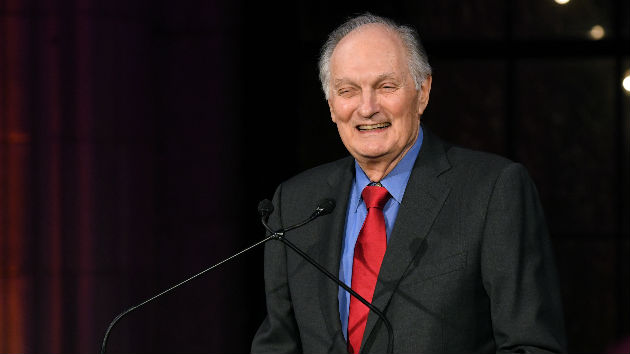 Photo by Michael Kovac/Getty Images for Radio Hall of Fame
Posted on January 18, 2019 by ABC News

Photo by Michael Kovac/Getty Images for Radio Hall of Fame(NEW YORK) — Ahead of receiving the the Life Achievement Award at the upcoming Screen Actors Guild Awards on Jan. 27, former M*A*S*H star Alan Alda has given an upbeat interview to People.

The 82-year-old actor, who was diagnosed with Parkinson’s disease almost four years ago, admits that at first, he was frightened by the diagnosis, but he hasn't let it slow him down.

"My life is more of an improvisation," Alda tells the magazine. "I just try to make the best of what’s in front of me."

Alda learned as much as he could about the degenerative condition, and he insists that staying active is key.
Indeed, the award-winning stage and screen actor's 2018 announcement to his fans that he had the disease was accompanied by video of him juggling. He also dances and does tai chi.

"I'm busy," Alda tells People. "I do occasionally do nothing and sit around. But I believe in doing everything in moderation, including moderation. So far it’s working."
The actor credits Arlene, his wife of 61 years, with keeping him positive, too.

He gushes, "We still experience a kind of puppy love."

Nathalie Emmanuel details struggle with body image: “We just beat ourselves up”
Elizabeth Olsen recalls failed ‘Game of Thrones’ audition: “It was awful. I didn’t get a callback”
Luke Wilson on ‘Legally Blonde 3’ reunion: “We’ll just have to see what happens”
Biden-Putin summit live updates: ‘I did what I came to do,’ Biden says
“It really upsets me”: Rita Moreno defends Lin-Manuel Miranda over ‘In The Heights’ colorism controversy
Scarlett Johansson says she spent “about 10 years just waiting” for the ‘Black Widow’ movie