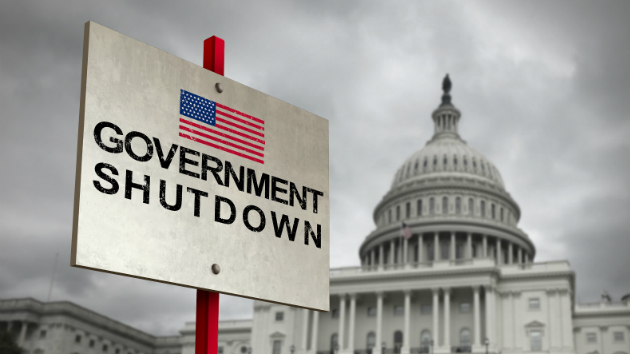 wildpixel/iStock(WASHINGTON) — As the longest-ever government shutdown reached Day 27 Thursday, the number of federal employees working without pay is up to 450,000 and could top half a million in the coming days, as the Trump administration continues to recall tens of thousands of workers after almost four weeks of shuttered doors at vital agencies.
The negative impact on the U.S. economy, which the White House now says will be double its original projections, is already affecting places like Colorado, where craft breweries are awaiting government approval on beers. Private contractors, some of whom are now without work since they were on projects with government agencies, and unlike furloughed federal workers, aren't guaranteed any back-pay.
The effect on contractors, Council of Economic Advisers Chairman Kevin Hassett said Tuesday, was one reason the White House upped its new estimate of the shutdown's cost.
On Wednesday, President Donald Trump signed a bill requiring back-pay for furloughed federal workers and those called in during the shutdown.

The "Government Employee Fair Treatment Act of 2019," requires "the compensation of government employees for wages lost, work performed, or leave used during a lapse in appropriations that begins on or after December 22, 2018."
The bill also allows "excepted employees" to use leave during the shutdown.

There are no high-level talks between the president and Congressional leadership planned for Thursday. The impasse over the president's demand for billions for his proposed border wall, which Democrats reject, continues.
The latest numbers
Right now, 800,000 federal workers are going without pay during the shutdown. Some 450,000 are now required to report to work, and tens of thousands more will be returning after recent announcements from the Trump administration.
At the IRS, 36,000 employees were asked to return to deal with tax season, About 1,700 Federal Aviation Administration aviation safety inspectors were told to return after the agency ran preliminary safety tests, and about 2,500 employees at the Agriculture Department will briefly return to process farm loans.
Why don't they strike?
Federal employees are prohibited from doing so and can get fired if they don’t show up. What’s more, many federal employees like their jobs and think the work they do is important. But they can call in sick, which appears to be the tactic by many Transportation Security Administration workers. Agency officials there told ABC News they think the sickouts aren’t because of illness or politics, but dealing with financial hardship.
Copyright © 2019, ABC Radio. All rights reserved.