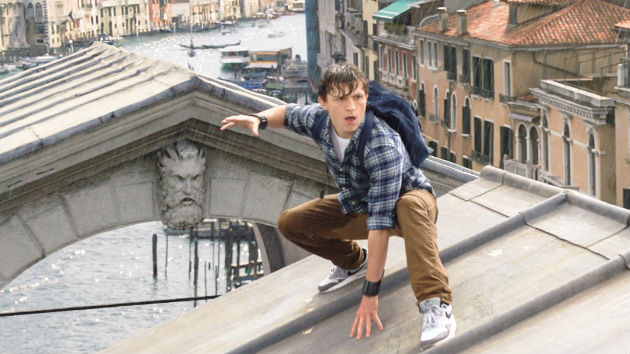 Sony Pictures(NEW YORK) — While comic fans buzzed about seeing Spidey alongside Marvel movie newcomer Jake Gyllenhaal as Mysterio in the first trailer for Spider-Man: Far From Home, the LGBTQ community had something else to cheer about. One of Peter Parker's buddies in the movie is played by 22-year-old trans actor Zach Barack.
This marks one of the first times a trans actor has been featured in the Marvel Cinematic Universe. In addition, The Advocate reports trans actor Tyler Luke Cunningham is a featured extra in the same film.
In Barack's Instagram posts, you can see the actor alongside his good buddy Jacob Batalon, who plays Peter's bestie Ned in the upcoming film from Marvel Studios and Sony Pictures.
Spider-Man follows popular CW show Supergirl, which cast 21-year-old trans performer Nicole Maines as the hero Dreamer. Maines knows her casting was significant for other trans actors.
"If I had had a trans superhero, someone who looks like me wearing a cape, [while] growing up, that would have changed the game," the actress recently told USA TODAY. "That would have been an entire new level of validation in myself, to think that I can be a superhero!"
Venus Lux, a trans activist, entrepreneur, and adult film star, tells ABC Radio that the tide is finally turning.

"I'm so proud and I'm so happy to be in this…time right now, that, you know, this can actually happen," she says. "It's not a dream. It is a reality."

She adds, "It just requires consistency of like pushing the envelope, and allowing more trans folks to be included and not just in a way where we're portraying certain characters, but also having the stories behind us."