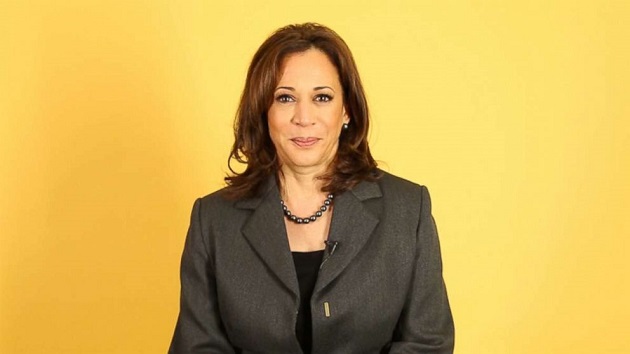 ABC News(NEW YORK) — Sen. Kamala Harris, who went from being the daughter of immigrants to a potential 2020 presidential candidate, said in an interview with ABC News' Good Morning America that she finds her political strength in knowing that "if it's worth fighting for, then it's a fight worth having."
Harris, D-Calif., soared to national prominence first as attorney general of California, and then by becoming the state’s third-ever female senator.
In her interview with GMA, the California senator opened up about her advice for young women, how she finds courage to fight in Washington, and her 2019 new year’s resolution.
On courage: ‘If it’s worth fighting for, then it’s a fight worth having’
Harris said that a lot of the courage she has to fight for what she believes in comes from her late mother, Shyamala Gopalan Harris, who instilled within her many of the values that continue to influence her political career to this day.
"A lot of the courage I have comes from my mother," Harris said. "My mother raised us with a belief that we could do anything. Her point was don’t let anybody tell you who you are, you tell them who you are."
Some of her courage to fight in Washington and beyond also comes "with the confidence in knowing that if you believe in something then you should know that if it’s worth fighting for then it’s a fight worth having."
Advice for young women: Remember you’re not alone
Harris, who is no stranger to breaking barriers as a woman in politics, said it’s important for young women to remember that they are not alone, and to build a network of support.
"There are going to be many times you are going to be the only one like you in a room," Harris said. "It could be a meeting room, it could be a board room, and the thing I want you to remember is this: When you are in that room, we are all in that room with you, cheering you on."
"So chin up, shoulders back, and you use your voice and you speak for all of the people who are so proud you are in that room, and want their voice to be projected through you," she added.
Harris said the second piece of advice she would give to young women is to "surround yourself with really good friends."
"Have people around you who cheer you on and applaud you and support you and are honest with you, and tell you, you know when your breath stinks," she quipped.
Look for people who will "celebrate your successes," she added. "The ones who you can also call in the middle of the night and laugh about the thing you’re not supposed to laugh about, or cry when you feel like crying, or curse when you feel like cursing."
She continued: "That’s really important because none of us have achieved the success we have without really good friends."
We need to talk about sexual assault
Harris also made headlines for challenging Supreme Court Justice Brett Kavanaugh’s confirmation late last year, but said that a lesson she gleaned from the hearings was that as a society, we need to talk more about sexual assault.
“One of the aspects of the Kavanaugh hearing, among the many, that I think is important is the importance of us talking much more as a society and a community of people about the issue of sexual assault,” she said.
“I know it makes people uncomfortable, I used to specialize in those cases as a prosecutor, and it is something that impacts so many people,” she added.
“We don’t want to think that it exists, but we have to talk about it, we have to let it out in the open,” she said. “We have to support survivors and we have to talk about something that we still have a lot of work to do in terms of combating.”
“Even though we would like to think that it doesn’t happen, it does, and we need to deal with it,” she added. “Let’s speak that truth.”
New Year's Resolution? Cook more
Harris revealed that her goal for 2019 is to "cook more," saying preparing a meal for her family and spending time with them over food is one of her passions.
"I spend time thinking about recipes, I plan menus in my head and then it’s just a matter of when can I get the family together and be home to cook Sunday family dinner," Harris said.
"So my goal this year is to do even more Sunday family dinners,” she said. “It’s my most favorite thing to do."

How ‘Ace Dad Advice’ creator helps and learns from his asexual community
House votes to repeal 2002 AUMF in effort to rein in presidential war powers
Christiane Amanpour reveals ovarian cancer diagnosis: What women should know
Harris invites all female US senators to have dinner at Naval Observatory
Harris kicks off tour of Southern states to boost vaccination rates
‘She Memes Well: Essays’: Quinta Brunson shares how she found success in the “sharable digital age”