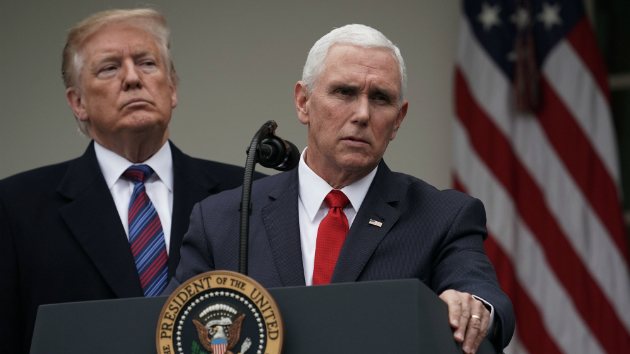 Alex Wong/Getty Images(WASHINGTON) — North Korea has still not taken "concrete steps" to dismantle its nuclear weapons program, Vice President Mike Pence said Wednesday, ahead of a reported meeting between North Korea's chief nuclear negotiator and top U.S. officials.
The admission was a candid assessment from the Trump administration, seven months after the president's summit with North Korean leader Kim Jong Un and as the White House prepares for a second meeting between the two leaders.
"While the president has started a promising dialogue with Chairman Kim, we still await concrete steps by North Korea to dismantle the nuclear weapons that threaten our people and our allies in the region," Pence told U.S. ambassadors and chargés d'affaires assembled in Washington on Wednesday.
To date, North Korea has taken no verifiable steps to destroy its nuclear weapons program, has refused to detail its nuclear facilities or stockpiles and has asked the U.S. to ease sanctions before it takes any further steps. While the regime has said they have shut down a missile engine test site and a nuclear test facility, those steps have not been verified by international inspectors, despite Secretary of State Mike Pompeo saying in October that inspectors would be allowed in "as soon as we get it logistically worked out."
Critics of the administration say North Korea has been clear all along that it is not interested in the unilateral disarmament that the Trump administration is seeking and that it is something it did not sign up for in that Singapore summit, despite Trump administration statements to the contrary.
"There really is a potential deal on the table here that involves significant limits on their nuclear and missile arsenal that would help alleviate the threat to the United States and our allies," said Adam Mount, a senior fellow at the Federation of American Scientists, but, "the Trump administration has always been all or nothing in these negotiations, and so far they've gotten next to nothing."
While Pence conceded North Korea hadn't taken concrete steps, Pompeo — President Donald Trump's point person on the North Korea talks — has been more defensive of the administration's progress.
"We're moving forward in these conversations, lots of ideas about how we might continue to decrease the risk to the American people … whether that's by our success to date in stopping their missile testing, stopping their nuclear testing," Pompeo told Fox News on Friday. "I am hopeful that in the year ahead we can make substantial progress on that, including getting another summit between the two leaders."
To that end, Pompeo is going to meet his North Korean interlocutor in the U.S. this week, according to a U.S official. Former spy chief and top aide to Kim, Kim Yong Chol may be traveling to Washington this week to meet Pompeo, and possibly Trump as well. The last time he visited the U.S. in May 2017, Kim Yong Chol met with Pompeo in New York and then traveled to Washington to hand deliver a letter to Trump from Kim, just weeks before the Singapore summit.
The State Department declined to confirm Kim Yong Chol’s visit or any meetings. But a U.S. official said the meeting is to take the North Koreans’ temperature ahead of a second Trump-Kim summit and see if such a meeting would be productive.
It would be the first time the two countries' lead negotiators have met since the North Koreans abruptly canceled a meeting in early November in New York. The State Department said at the time the meeting was postponed, but rescheduling has dragged on as the two sides are at a stalemate over what comes next: U.S. sanctions relief or North Korean action.
To date, the U.S. Special Representative for North Korea Steve Biegun has yet to meet with his counterparts for detailed negotiations. Instead, it seems, Pompeo's meeting with Kim Yong Chol has only been rescheduled because Kim may be able to meet with Trump as well.
As the two sides try to finalize details on a second summit, Pompeo has said the U.S. will not make any concessions until North Korea takes steps to dismantle its nuclear weapons program.
"I don't think there has been a single variant from the core proposition, which is the fully denuclearized North Korea as verified by international experts," he said Friday. "We intend to achieve that."
Copyright © 2019, ABC Radio. All rights reserved.