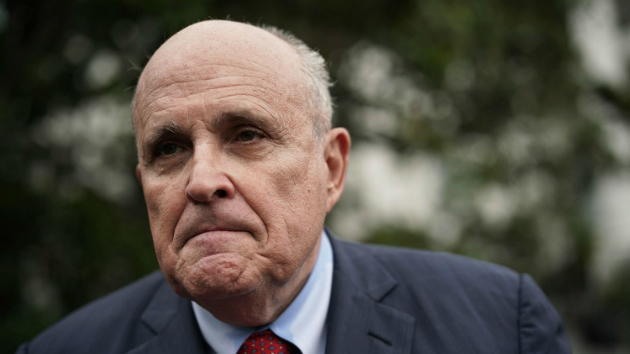 Alex Wong/Getty Images(WASHINGTON) — President Donald Trump's lawyer Rudy Giuliani sparred with Chris Cuomo in a heated — and often pinballing — interview Wednesday night. The former New York City mayor tried to defend the president and impugn the credibility of special counsel Robert Mueller's investigation into Russian meddling in the 2016 election.
In one spirited debate, Giuliani told Cuomo, host of Cuomo Prime Time, that he had never said the president didn't collude with Russia during the campaign.
"You just misstated my position," Giuliani said, interrupting the host. "I never said there was no collusion between the campaign! Or between the people in the campaign."
"Yes, you have," Cuomo interrupted.
"I have not. I said the president of the United States — there is not a single bit of evidence the president of the United States committed the only crime you could commit here: conspired with the Russians to hack the DNC," Giuliani said.
Trump of course has tweeted the phrase "no collusion" dozens of times, including 51 times in 2018 (and once in 2019).
Giuliani himself, contrary to his interview with Cuomo, has echoed the "no collusion" claim many times. After a CNN interview in July 2018, he responded to a viewer with exactly that claim. He tweeted, "No collusion, no obstruction. President Trump did nothing wrong."
Giuliani also explained away one-time Trump campaign chairman Paul Manafort's alleged contact with an ex-Russian agent, saying, "He was only there for six months — or four months."
Defense attorneys inadvertently revealed earlier this month that Manafort is accused of sharing 2016 campaign polling data with Konstantin Kilimnik, a longtime business associate whom the special counsel has identified as a former Russian intelligence officer.
While defending handing over polling data as not being collusion, Giuliani said, "Polling data is given to everybody," before conceding, "He shouldn't have given it to them" just one question later.
Later in the interview, Giuliani seemed to hedge even further about collusion, saying, "If the collusion happened, it happened a long time ago. It's either provable or it's not. It's not provable because it never happened."
Seconds later, when asked what he meant by "if it happened," Giuliani responded: "I'm telling you there's no chance it happened."
The former mayor did say Mueller's report should be made public, but also said Trump and himself should be able to see it first and he should be able to offer a response on behalf of the president.
Copyright © 2019, ABC Radio. All rights reserved.