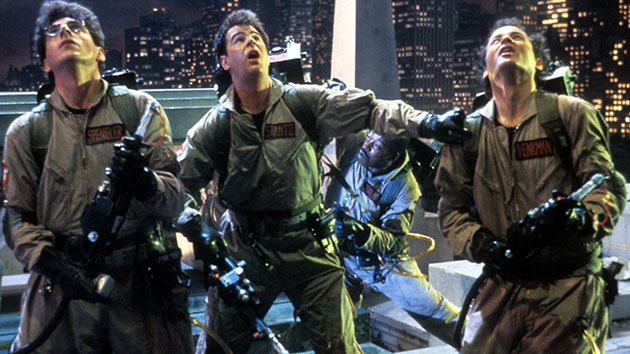 Columbia Pictures/Getty Images(NEW YORK) — A day after learning that a new Ghostbusters movie directed by original helmer Ivan Reitman's son, Jason, is in the works, comes the the first teaser-trailer.

The video opens with a shot of an eerie looking barn on a dark, stormy night. As spooky music plays — the opening notes from Elmer Bernstein's score of the original film — the camera moves closer and closer to the structure, where we see a tarp covering what turns out to be the iconic Ghostbusters vehicle, Ecto-1, used in the original films to carry our ghost-busting heroes around the Big Apple.

The teaser ends with the unmistakable sound of the 'busters' tool of their trade, a nuclear accelerator, firing up, timed to the appearance of the legend: "2020."

Producers have been mum on the plot of the new film, which is set to begin shooting in the summer with an eye toward a summer 2020 release. There's also no word on whether any of the original Ghostbusters stars will return for the new flick, although two — Dan Aykroyd and Ernie Hudson — have expressed an interest.

Aykroyd, who played Dr. Ray Stantz in the 1984 movie and its 1989 sequel, replied to Reitman's Twitter post revealing the teaser with "If you need a tune-up, you know who to call #GB20."

Hudson, who portrayed Winston Zeddemore, added to Aykroyd's reply with "Bigger than a 100-ft marshmallow man!"

GM to increase electric vehicle investment to $35B through 2025
Eight hospitalized after vehicle drives into crowd at Texas racetrack
Regé-Jean Page teases fans for misremembering the iconic “I burn for you” line
As if! Alicia Silverstone adorably reenacts iconic ‘Clueless’ scene with son, Bear
Donald Trump returns to stage with speech at North Carolina GOP convention
Expiration dates for apportioned vehicle registrations extended to June 16