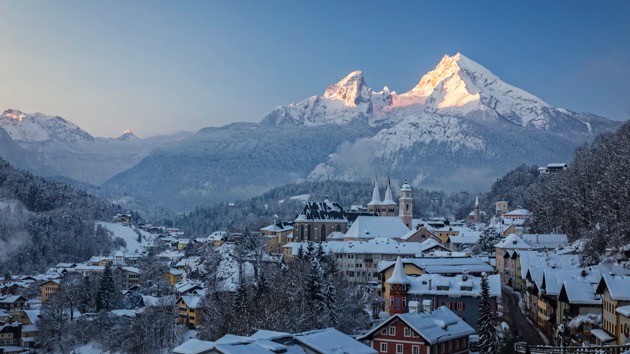 DieterMeyrl/iStock(BERLIN) — Areas in southern Germany and Austria have been battling heavy snows in the past weeks in a phenomenon so extreme, German media have dubbed it “Schneechaos”, or “snow chaos” in English.
Now, Bavarian residents are being asked to leave their homes to avoid more possible disasters.
With increased snowfall over the past weeks, the risk of avalanches is growing by the day.
On Wednesday, roughly 260 citizens in the village of Raiten in the region of Traunstein near the Austrian border were forced to evacuate their homes out of concern for possible impending avalanches.
In a video statement on Facebook, Traunstein District Administrator Siegfried Welch said the option to evacuate had "the highest priority."
"We don’t like doing so, but we decided to vacate," he explained.
On Wednesday, the Sudelbelt ski resort in Bavaria was hit by an avalanche and forced to close until trees and other debris could be moved, causing chairlifts to come to a standstill. Fortunately, no one was injured.
In Brechtesgaden, a town in the Bavarian alps near the Austrian border, 1,500 German Armed Forces soldiers were deployed to clear roofs of snow and deliver supplies to citizens cut off from the outside world.
The heavy snows and weather-related incidents have resulted in the deaths of more than two dozen people, including a 9-year-old boy who was killed by a falling tree in the town of Aying near Munich.
Copyright © 2019, ABC Radio. All rights reserved.