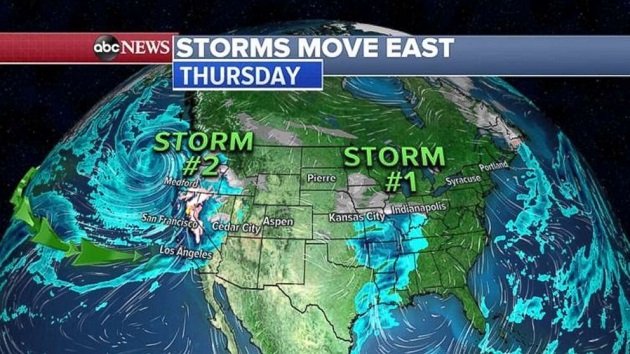 ABC News(NEW YORK) — Almost 6 inches of rain just fell in central California and the southern part of the state has seen more than 4 inches, resulting in flooding and rockslides reportedly hitting cars.
Wind gusts of up to 98 mph also were reported in central California, and in the Bay Area, trees were toppled, with some falling on cars.
A second, stronger storm is continuing to batter the West Coast Thursday morning with 40-foot waves, heavy rain, damaging winds and heavy snow in higher elevations.
Winter storm watches have been issued in the Northeast, including Boston, which mainly is watching for the second of the two storms to move across the U.S.
The first of the two storms should hit the Northeast Thursday night and into Friday, bringing light snow — 1 to 3 inches — to areas including Washington, D.C., Philadelphia, New York and Boston.
Temperatures will be near freezing, and Friday commutes could prove quite slick.
The second storm is expected in the Northeast by Saturday night, delivering snow from D.C. up to Boston, with some of that snow changing to sleet as warmer air joins the system.
Further inland, some areas in western Pennsylvania and northern New York and New England may see several feet of snow.
Behind the storm, Arctic air is forecast to spill into the central U.S., with the coldest air of the season resulting in wind chills below zero for much of the Midwest and Great Lakes region.
This bitterly cold air will make it to the Northeast by Sunday night, into Monday, sending wind chills in some places below zero.