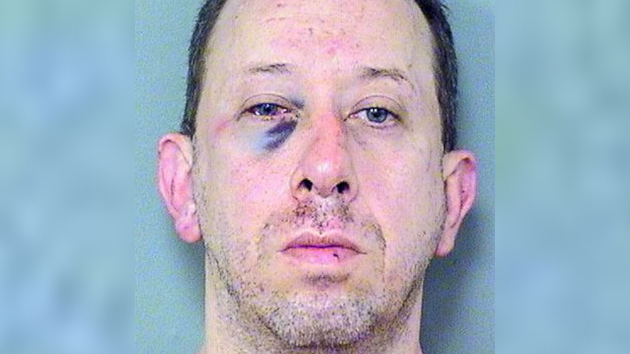 Palm Beach County Sheriff's Office(PALM BEACH, Fla.) — He hasn't played in the NFL since 2007, but Tony Beckham proved he can still deliver a hit when it comes to protecting his family.
The 40-year-old Beckham said he caught an alleged peeping Tom outside his Palm Beach County, Florida, home leering through the bedroom window of his teenage daughter and fondling himself.
"We had a good conversation," Beckham, 40, told ABC affiliate station WPBF-TV in Palm Beach County of the stranger.
During the "conversation," the suspect, 48-year-old Geoffrey Cassidy, suffered a black eye and fractures to his face, according to the Palm Beach County Sheriff's Office.
Cassidy was arrested and booked at the Palm Beach County Jail on suspicion of lewd and lascivious behavior. He was being held on $1,500 bond Thursday, according to jail records.
Beckham said he was leaving home for work about 6:40 a.m. on Monday when he saw the peeper standing outside his daughter's bedroom window with his pants partly down and masturbating.
"I couldn't believe it. I was just like, 'Is this for real?" Beckham said. "I thought I was getting punked, like this isn't happening."
He said he yelled at the man who took off running.
Beckham, a former defensive back for the Detroit Lions and Tennessee Titans, quickly caught the man and held him for police.
"I'm sorry that it happened to me. I'm sorry that it happened to him," Beckham said. "He's never going to do that again on this side of town."
Beckham said he's worried that Cassidy has done this before.
"If he was brave enough to do it right here, I know it is not the first time he has done that before," said Beckham, adding that he wants to make the community aware of Cassidy.
Beckham's wife, Amanda Beckham, told WPBF-TV that she's concern about why Cassidy allegedly targeted her family.
"I don't know if this was his first time coming here, if he's been here before or where he's seen us or how he picked us out, but it's scary," she said.