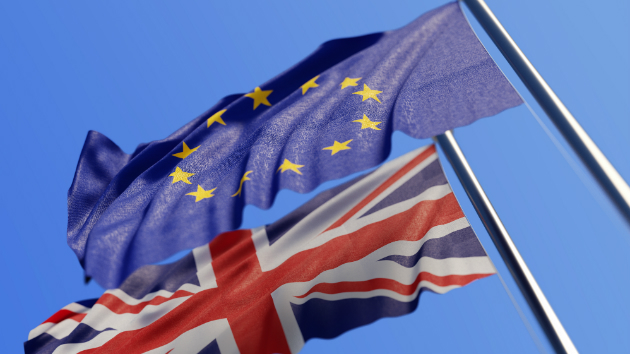 MicroStockHub/iStock(LONDON) — British Prime Minister Theresa May and her government survived a vote of no-confidence on Wednesday and will remain in power for the time being.
However, the future of Brexit is far from certain.
The U.K. voted in June 2016 to leave the European Union by a majority of 52 to 48 percent. But the question on the ballot did not specify what relationship Britain would have with the European bloc if it left, and the last two years have been fraught with negotiations and politicking.

The deal May secured with the EU was voted down by Parliament on Tuesday by a historic margin of 432-202, leaving an open question of how the U.K. will leave the EU.
It is possible that the U.K. will leave the EU on March 29 without a deal in place, which is likely to cause major disruptions. If the U.K. seeks to delay the exit date and ask for more time, their request will have to be agreed on by all 27 EU Member States.

Meanwhile, Guy Verhostadt, the Brexit coordinator for the European Parliament, has said that it is “unthinkable” that the extension would go beyond the European elections in May.
With the March 29 deadline to leave the EU looming ever closer, here’s what could happen next:
The prime minister’s plan B
After the Brexit deal May proposed was rejected on Tuesday evening, the prime minister will now have to present an alternative plan to parliament on Monday. May has said she will reach out to senior parliamentary leaders from all political parties to find out what changes would persuade them to vote for a new deal.
The prime minister has two main options:
1. Renegotiate the current deal. May could seek concessions from the EU on the controversial points of her current deal, such as on the Irish backstop. It is highly unlikely she will secure major concessions by Jan. 21.
2. The prime minister could abandon her plans entirely and pursue a "Soft Brexit." This will satisfy the opposition Labour Party and “Remainers” in her own Conservative Party. Soft Brexit would mean the U.K. remains closely tied to the EU, staying in the customs union and remaining under key EU policies such as freedom of movement. This scenario is more likely to get Parliament’s approval, but May will be risking an irreparable divide with the “Hard Brexiteers” in her own Conservative party.
If May can secure Parliament’s approval, whatever her next plan may be, the U.K. will leave the EU on March 29 with that deal.
And if plan B doesn’t work?
Finding a solution to persuade Parliament is no easy task. The rejection of May’s deal on Jan. 15 was the biggest defeat for a government in modern British political memory. If May’s new deal goes before Parliament and she loses, things get really complicated. May could either:
1. Keep trying again and again with more variations of the deal. This is unlikely to happen as faith in her leadership would dwindle.
2. Resign. This would likely trigger a general election and delay the March 29 deadline. A new government would be tasked with handling Brexit.
3. Pursue a “no deal" Brexit.
No Deal
This is the default position the U.K. is now in. If nothing else happens, the U.K. will leave the EU with no deal on March 29.
MPs want to avoid this scenario, as it promises to be hugely disruptive and damaging to both the U.K. and the EU. However, with each day the deadline approaches, a no-deal outcome becomes more and more likely.
A second referendum?
If May decides to support a “no deal” Brexit after MPs reject her plan, a second referendum is also possible. There is a growing campaign, supported by a number of influential MPs, to have a “People’s Vote” on the final terms of any Brexit outcome.
To get there, a majority in Parliament would have to vote for a bill to seize power over Brexit from the government, and hand it to a committee. This scenario would be given considerable weight if the opposition Labour Party decides to support a second referendum.
A second referendum would delay Brexit by several months, and certainly well beyond March 29. Parliament would then proceed to deal with with whatever the result is.
Like the prospect of no deal, the chances of this once far-fetched proposition are now increasing.
Copyright © 2019, ABC Radio. All rights reserved.

What’s behind the ‘dire’ COVID-19 surge in Michigan?
What’s next for Amazon union election in Alabama after do-over is ordered
What’s it like to have a character balloon at the Macy’s Thanksgiving Day Parade? ‘Diary of a Wimpy Kid﻿’ author Jeff Kinney weighs in
Michael …Spaceman? ‘Good Morning America’ co-host Michael Strahan going to space aboard next Blue Origin flight
‘GMA’ co-anchor Michael Strahan to fly to space on Blue Origin’s next space flight
‘What’s at stake is obviously the security of our nation,’ NSA chief says of defending US from cyberattacks