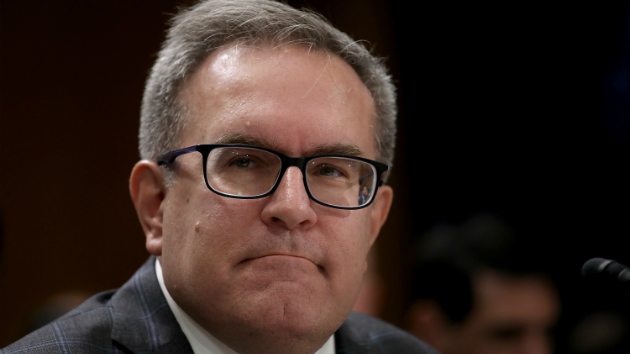 Win McNamee/Getty Images(WASHINGTON) — As much of the energy in Washington is focused on the fight over the president's border wall and impact of the partial government shutdown, President Donald Trump's nominee to take over the federal agency charged with protecting human health and the environment is scheduled for a crucial hearing.
Andrew Wheeler took over the helm of Environmental Protection Agency in July after Scott Pruitt, the previous administrator, resigned amid increasing ethical questions and controversy.
Wheeler has been working as acting administrator for several months and Trump nominated him to officially take over the post earlier this month.
A spokesman for the Environment and Public Works committee said in a statement senators are expected to question Wheeler on his track record since taking over at the agency as well as the impact of the government shutdown. The vast majority of EPA's nearly 14,000 employees have been sent home without pay.
"As EPA acting administrator, Andrew Wheeler has largely kept intact and built upon Scott Pruitt's policy agenda at the expense of the agency's mission to protect the environment and public health — from weakening fuel-economy and greenhouse-gas tailpipe standards for vehicles to undermining the MATS rule, the list goes on," the spokesman said in a statement.
Democrats also will likely ask about Wheeler's connections to companies he represented as a lobbyist.
Democrats on the committee, led by Ranking Member Sen. Tom Carper of Delaware, have have raised concerns that EPA employees are struggling without pay during the shutdown and that important environmental enforcement is on hold while they're not at work. Carper has also raised concerns that Republicans are trying to rush the nomination by having the hearing during the shutdown.
Public health and environmental advocacy groups have also raised concerns that Wheeler, like Pruitt, will continue to roll back environmental regulations including rules intended to prevent emissions of mercury and other toxic substances from power plants.
Copyright © 2019, ABC Radio. All rights reserved.