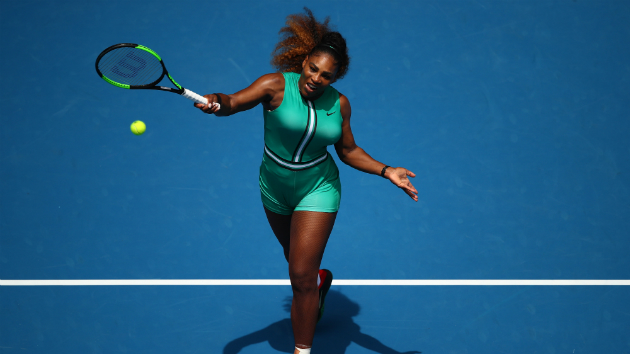 Julian Finney/Getty Images(MELBOURNE, Australia) — Serena Williams defeated Tatjana Maria in her first match at the 2019 Australian Open on Monday. It was a triumphant return to the tournament after competing — and winning — while pregnant in 2017.
Perhaps what was equally exciting to fans of the tennis star was her choice of performance wear this year: a bright green Nike bodysuit.
During her post-match presser, Williams described the look as a "Serena-tard," to the delight of the room.

"I wanted to be fit. I came back. Nike always wants to make an incredibly strong, powerful statement for moms that are trying to get back and get fit," she said. "That was basically it for me."
Williams posted a photo of herself from the match, with a reference to her last Australian Open appearance when she was pregnant.
"Playing solo this time," she wrote, adding a wink emoji to the caption.
She described how she felt about the win after her 2017 victory during a press conference.

"I think the last time I was here, I was actually pregnant and playing at the same time, which is insane," she said.
"It was kind of weird walking back on — by myself, this time," she added.
Williams' on-court looks have become a topic of conversation, especially after French Open president Bernard Giudicelli criticized her outfit from the tournament in 2018. Williams was instrumental in enacting change in the tennis performance wear rules for women.
After the controversy, the Women's Tennis Association made a dress code change and will now allow athletes to wear leggings and mid-thigh length compression shorts with or without a skirt, shorts or dress.
During the post-game presser after her match against Maria, Williams revealed how she uses her time off.
"Spending a lot of time with my daughter," she shared. "I think that's the priority for me. And I feel like literally every moment I get I practice, and then I go home. It's kind of what I do in Florida. I train and I go right home and I spend the rest of the day with my daughter."
She also explained why taking time to be with her daughter, 1-year-old Alexis Olympia Ohanian, Jr., is so important to her.
"For now, as a working mom, I feel guilty. And I understand that that's normal, but — and these are years I'll never get back," she said. "I just try to spend every moment that I can when I'm not working with her. And for me that's super important."
Copyright © 2019, ABC Radio. All rights reserved.