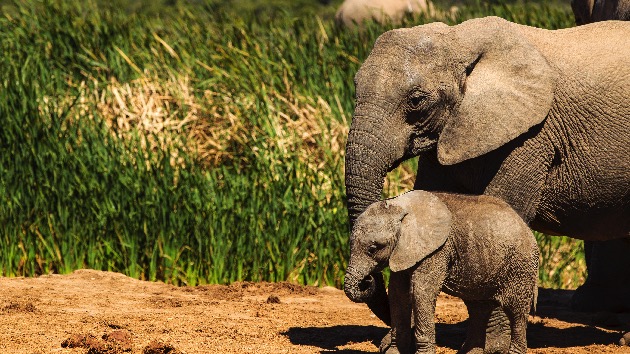 LeighGregg/iStock(ROME) — The elephant herds in Gorongosa National Park, in central Mozambique, are survivors.
Despite massive poaching operations that decimated more than 90 percent of the elephant population in the park during the Mozambique Civil War 30 years ago, a small number survived, and the population is growing again.
But a team of scientists monitoring the herd noticed a remarkable trait among the survivors: some 30 percent of the new females are born without tusks.
"The key explanation is that in Gorongosa National Park, the tuskless elephants were the ones which eluded poaching during the civil war and passed this trait on to many of their daughters," Dominique D'Emille Correia Gonçalves, a PhD student from the England’s University of Kent on a team researching the phenomenon, said in interviews with British media this week.
The scientists noted that many in the herd have no tusks or smaller than usual tusks, which makes the animals less attractive to poachers. The team also noted that the females in the Gorongosa herds are much more aggressive to humans than other African elephants.
"Many of the matriarchs and lead females of the family units were alive during the slaughter and saw their families and friends being hunted," Correia Gonçalves added. "They are survivors, and the trauma is still present, which would explain such intolerance to humans."
The 26-year-old ecologist, who also heads the Elephant Ecology Project, was part of a team that attached GPS tracking collars to 10 females and conducted genetic studies of the population to further test their assumptions.
Dr. Michael D. Kock, a wildlife veterinarian who studies African elephants, is doubtful that the increased number of tuskless elephants is due to natural selection.
In his research of the elephant population in North Luangwa, Zambia some 60 percent of the surviving elephants were tuskless, but as conservation efforts allowed the numbers to grow, the percentage of animals with tusks returned to normal.
"In my opinion, it is purely to do with the fact that poachers target tusked animals, and as they reduce the population of elephant, the survivors are the animals naturally without tusks. Therefore, the tuskless gene predominates because a tuskless animal is less likely to be killed," Kock said in an email to ABC News.
"The tusked gene predominates in the population under normal circumstances," Kock added. "Preventing the killing of tusked elephants and a growth rate of 8 percent or more will see the ratio revert closer to normal. This is not natural selection but poaching pressure selection!"
Correia Gonçalves said her team's research is not exactly linked to Darwin's theories, though.
"These tuskless elephants are growing from the survivors of poaching," she told the Daily Mail, "so while we are not talking about evolution yet, we could be talking about the removal of certain genes from the population."
Studies of the effects of poaching are not limited to Mozambique. Researchers following elephants in Addo Elephant National Park in South Africa found that 98 percent of the 174 female elephants in 2000 were also tuskless.
"The prevalence of tusklessness in Addo is truly remarkable and underscores the fact that high levels of poaching pressure can do more than just remove individuals from a population,” Ryan Long, a University of Idaho behavioral ecologist told National Geographic last fall.
Researchers add that elephants without tusks cannot dig for water or scrape bark for food, forcing them to travel greater distances to survive.
Kock highlighted one other peculiarity from his research on the effects of poaching on forest elephants.
"I have worked with forest elephants for 15 years and have never seen a tuskless forest elephant. This may be due to the difficulty in poaching these animals in dense forest, and the elephants learning and avoidance behavior," he said. "Poaching pressure in forest elephant has resulted in a complete change in behavior, with animals visiting forest clearings in the middle of the night, leaving well before dawn and heading for dense refuges where they spend the day."
Long told National Geographic that the lasting effect humans have had on the animals could have wide-ranging impacts.
"Any or all of these changes in behavior could result in changes to the distribution of elephants across the landscape, and it's those broad-scale changes that are most likely to have consequences for the rest of the ecosystem," he said.
Copyright © 2019, ABC Radio. All rights reserved.