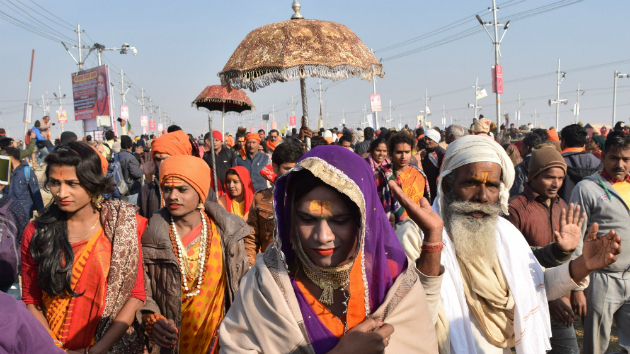 Satyam Shrivastav/Hindustan Times via Getty Images(LONDON) — Elephants, horses and an expected crowd of more than 120 million people began to descend on Prayagraj, India, Tuesday, marking the beginning of Kumbh Mela, the world’s largest religious gathering.
The 49-day holy festival takes place in the northern city of Prayagraj at the confluence of the two rivers considered sacred to Hindus: the Ganges and the Yamuna, in the state of Uttar Pradesh. Devotees believe that a dip in the rivers can absolve them of their sins.
The Indian government has said that it expects millions of people from across India and abroad to visit the area, easily making it the largest gathering of people for a religious event anywhere in the world. By comparison, approximately 2.4 million people gathered in Mecca for the Hajj last year, according to the BBC.
“It is the biggest confluence of faith and culture,” Vijay Kiran Anand, a senior officer from the Indian Administrative Service who is in charge of the Kumbh Mela, told ABC News from Prayagraj. “It is a demonstration of India’s capability to deliver in terms of infrastructure, mass gathering events and governance. It is also India’s story and India’s heritage that we can project to the world.”
The total cost of this year’s festival for the Indian government is close to $563 million, according to officials — almost four times the money spent on the last Kumbh Mela, held in 2016.
“We have spent that money on development and infrastructure in Prayagraj,” said Anand. “Most of it is permanent works, building of roads and bridges for [the] enhancement of the city.”
Roughly 150 new roads have been created in the area, as well as 500 miles of new water pipelines, 54 electricity substations, 40,000 LED lights, 100,000 toilets, 20,000 dustbins, 200 vehicles, 22 bridges, and parking areas to accommodate an estimated 500,000 vehicles.
The police aren’t taking any chances either.
KP Singh, the deputy inspector general of police in the state of Uttar Pradesh, told ABC News that a total of 20,000 police personnel have been deployed to maintain law and order during the festival. Previous Kumbh Melas have been marred by stampedes because of poor crowd control.
“This time, we are using CCTVs, have created an integrated crowd control station with 11,000 cameras keeping an eye on the crowds,” Singh told ABC News. “With all the inputs that come in, we are able to use traffic management techniques to direct crowds and keep the festival safe.”
He added that police were also working with apps like E-cop, which allows complaints to be registered online.
"Even a missing persons report can be filed via the app and we can trace and reunite lost family members," Singh said.
The government has also created medical facilities, and a 100-bed hospital.
“Just like any other district, there are emergency numbers and responders here," Shivshankar Mahadevan, a police official, told ABC News.
But apart from more earthly concerns like police and crowd control, devotees describe the festival as a spiritually uplifting life event.
Copyright © 2019, ABC Radio. All rights reserved.