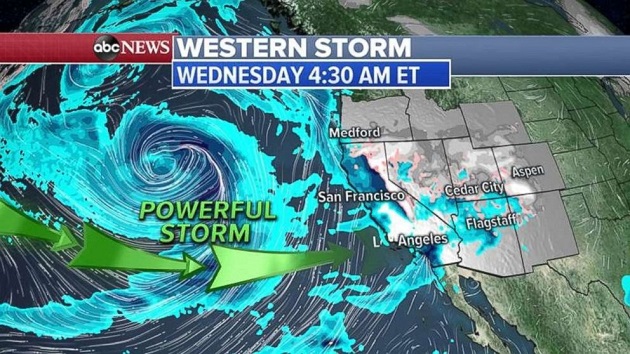 Numerous flood, wind and snow alerts have been issued from California to Colorado.
The powerful storm is in the Pacific on Wednesday morning and getting closer to the West Coast — landfall should be Wednesday afternoon and into Wednesday night.
Very heavy rain is forecast for parts of California, and the threat for mudslides, rockslides and flooding will increase. Powerful winds will accompany the storm, gusting to as high as 100 mph in the mountains.
Snow accumulation will be measured in feet not inches, with some areas in the Sierra Nevada getting almost 6 feet.
Meanwhile, the first in a series of storms that hit the West Coast earlier this week will reach the Midwest Wednesday night and bring some light snow. It will reach the Northeast by Thursday night and deliver a few inches of snow from Philadelphia to New York City and Boston. At this point, about 1 to 2 inches of snow is possible along Interstate 95 Thursday night, so the Friday morning commute could be slick.
The stronger western storm will move into the Midwest on Friday night into Saturday, bringing snow from Oklahoma to Ohio. Several more inches of snow are possible with this storm.
The storm will move into the Northeast by Saturday night with a mix bag of precipitation in the I-95 corridor. Heavy snow is expected from Ohio into western Pennsylvania and from upstate New York into New England. Several feet of snow is expected there on Sunday.
Behind the storm, the coldest air of the season will move into the Midwest and Deep South. There will be wind chills below zero in the Midwest — and teens into Dallas.
These arctic wind chills move into the Northeast on Monday and Tuesday.