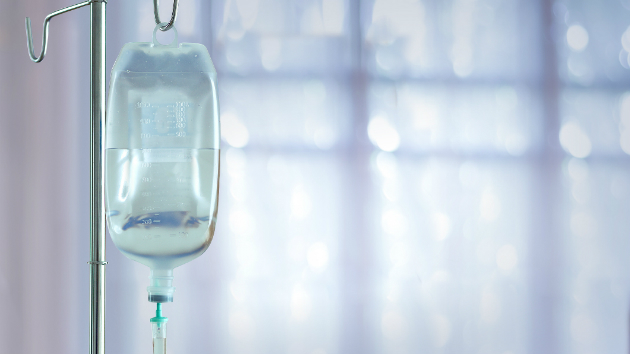 thekopmylife/iStock(NEW YORK) — IV treatments that promise to do everything from boost energy to combat stress are making a big splash already in 2019, topping the wellness trends lists for the new year.
No longer just a luxury afforded to celebrities and VIPs, IV treatments are now offered in cities like Kansas City, Missouri, and Sarasota, Florida, and in homes and offices.
Maria Gracia Munoz, 34, started getting IV treatments nearly five years ago after daily 5:30 a.m. CrossFit workouts left her ready to crash and burn by the end of the week.
“I saw it was good for chronic fatigue and I thought, ‘Why not,’ so I started doing a regimen of once a week,” she said. “I believe in it.”
Munoz, of Weston, Florida, is a holistic nutrition health coach who works in a medical center that offers IV treatments.
She now gets an IV drip twice a month and says she sees it as a boost, but not a replacement for her daily supplements and good health habits.
A few states away, in Kansas City, Missouri, clients at Revive & Rally IV Therapy include everyone from active people looking to get more from their workouts to chefs who work long shifts, travelers suffering from jet lag and people trying to ward off a cold or the flu.
"Most of our business is health-conscious people and people with mild to moderate illnesses who are not bad enough to go to the ER but still need hydration," said Justin Ranes, M.D., the clinic's medical director. "A misnomer is you hear about IV drips marketed in places like Vegas as a hangover cure. That has not been our business much at all."
Ranes opened the clinic last year with a group of registered nurses he previously worked with in an intensive care unit. He sees Revive & Rally IV Therapy as providing a cost-effective service to the Kansas City community.
"The cost of going to ER for an IV can be over $1,000, and we can do that for one-tenth of the cost," he said. "People are looking for another way to get things done where they don’t have to go through insurance or pay astronomical bills for something that is pretty basic."
IV drips at Revive & Rally IV Therapy range in price from $75 for a bag of fluids to upwards of $200 for a more customized mixture of vitamins and minerals. The IVs are administered by registered nurses, according to Ranes.
Risks of IV therapy
Along with the possible benefits of IV therapy, like improved energy, come risks, experts say.
Any injection with a needle is considered invasive and carries the small but existing risk of localized bruising and bleeding, regardless of whether it’s administered by a doctor or an RN, according to Dr. Naomi Kaplan, a resident physician in physical medicine and rehabilitation and a member of the ABC News Medical Unit.
A needle prick also carries the risk of introducing an infection into the blood stream, which can be life threatening, according to Kaplan. Repeated IVs in the same vein could also potentially cause sclerosis, a hardening of the blood vessel, and there is a risk of inflammation of the vein that the IV is in.
Consumers should also be aware that the U.S. Food and Drug Administration (FDA) does not monitor the supplements in IV therapy. Companies are using their own standards of safety and quality, which may make them hard to compare and may be variable.
The Federal Trade Commission (FTC) in September charged a marketer and seller of IV therapy products with "making a range of deceptive and unsupported health claims about their ability to treat serious diseases such as cancer, multiple sclerosis, and congestive heart failure," the FTC said in a news release at the time.
“This enforcement action should send a clear message to the burgeoning iV therapy industry and sellers of all healthcare products,” Joe Simons, FTC chairman, said in a statement in September. “Health claims must be supported by competent and reliable scientific evidence.”

How does IV therapy work?
The power of IV therapy is that it delivers the products, whether hydration fluids or vitamins, straight to your veins, according to Dr. Frank Lipman, a pioneer in the fields of integrative and functional medicine, who has been administering IV therapy to his clients for the past 20 years.
“It is an easy way to get nutrients right into [the] system quickly without having to be absorbed through the digestive system,” he said. “I used it and I have been using it for the last 20 years very specifically for people who are tired, run down or getting sick, and it works really well.”
IV vitamin therapy may include combinations of vitamin C, B12, magnesium, calcium or glutathione, a master antioxidant, and many other options in between.
The IVs typically take anywhere for 15 to 30 minutes to administer and patients can pick up in their daily lives immediately after, according to Lipman.
Lipman, who is based in New York City and treats a large celebrity clientele, said he endorses IV therapy as an effective therapeutic tool for specific ailments, but he does not endorse the trend it has become, especially as a quick fix or a hangover cure.
"People need to understand that it's another way to stay healthy but you need to take responsibility for your own health," he said. "You can't just rely on someone shooting you up with vitamins to stay healthy. That's missing the point."
Lipman added, "And now anyone can do it and they can get the cheapest ingredients and I don't think that's a good idea either."
Lipman, author of How to Be Well: The Six Keys to a Happy and Healthy Life, sees IV therapy as helpful because it provides such a boost of energy for many people that it motivates them to get healthier on their own.
"People realize how much better they can feel and I think that's important," he said. "When they have a subjective sensation of vitality and wellness, it does encourage them to go in that direction."
For people who want to try IV therapy on their own, it is preferable to have it done in a physician's office, but not essential, according to Lipman.
An IV can be a way to "push the restart button," according to Lipman, but just because IV therapy is now widely available, does not mean that it is a must-do for everyone.
"From where I'm coming from, this is another entry point into wellness and how to be well," said Lipman. "Is this going to encourage you to move your body more, to think about what you put into your body, to think about where your mind goes and how to control that? Those are more important aspects of wellness and how to be well than IVs."
Copyright © 2019, ABC Radio. All rights reserved.