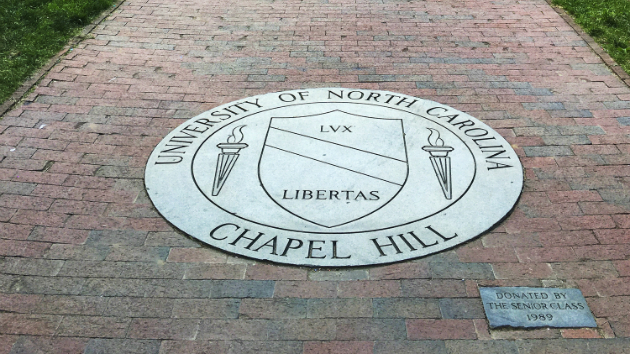 DNY59/iStock(CHAPEL HILL, N.C.) — The chancellor of the University of North Carolina at Chapel Hill is slated to step down later this year, but she plans to settle a controversial debate before she leaves.
Carol Folt said she'll resign at the end of the school year, according to a statement released Monday that also laid out plans to remove the remaining parts of a Confederate monument on campus that many deemed racist.
Protesters toppled "Silent Sam" in August as a part of a demonstration against the century-old statue, but the pedestal remained.
"The presence of the remaining parts of the monument on campus poses a continuing threat both to the personal safety and well-being of our community and to our ability to provide a stable, productive educational environment," Folt said in a statement. "No one learns at their best when they feel unsafe."
Folt, named chancellor in 2013, said a review by an independent panel of safety experts in November laid out a "compelling case for risks to public safety." She said the remaining parts of the monument would be preserved until their future is decided.
"While I recognize that some may not agree with my decision to remove the base and tablets now, I am confident this is the right one for our community — one that will promote public safety, enable us to begin the healing process and renew our focus on our great mission," Folt said.
Folt's surprise decision to place the pedestal in storage drew angry responses from some university leaders, including the head of the school's board of governors, but others cheered the move.
"This is a good day for the anti-racist activists of this town," Kristen Laverly, a UNC senior, told ABC affiliate WTVD-TV on Monday. "All of these people out here have put their mental, emotional and physical health on the line to be able to achieve what's happened here."
UNC Board of Governors Chairman Harry Smith said the board would ultimately have the last word on the monument's fate.
"We are incredibly disappointed at this intentional action. It lacks transparency and it undermines and insults the Board's goal to operate with class and dignity," Smith said in a statement. "We strive to ensure that the appropriate stakeholders are always involved and that we are always working in a healthy and professional manner."
Gov. Roy Cooper issued a statement early Tuesday in support of the Folt's decision.
"I appreciate the Chancellor's actions to keep students and the public safe," Cooper said. "North Carolina is welcoming to all, and our public university should reflect that."
Copyright © 2019, ABC Radio. All rights reserved.

Paris Jackson says paparazzi left her with “hallucinations” and “severe paranoia”
17-year-old suspect arrested in Austin mass shooting that left 1 dead, 13 injured
Report: MLB to crack down on foreign substances
“The Bachelorette” recap: Katie lays down the law after learning some of the men may be playing her
From facial recognition to dating apps, technology is helping investigators track down Capitol rioters
Cybersecurity experts break down a cyberattack as they become increasing threat