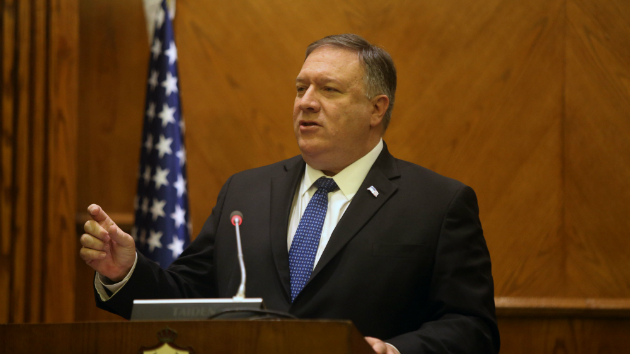 Jordan Pix/Getty Images(WASHINGTON) — As the Trump administration struggles to clarify confusion over its Syria policy and the impending withdrawal of U.S. troops, the latest tweets from President Donald Trump have even his top diplomat guessing at what they might mean.
Secretary of State Mike Pompeo on Monday attempted to clarify an especially provocative Trump tweet that the U.S. would "devastate Turkey economically" if the Turks attacked Kurdish partners of the U.S. in Syria. Speaking to reporters in Saudi Arabia, Pompeo declined to say what the president meant by economic devastation but guessed it was a reference to sanctions.
"We’ve applied sanctions in many places around the world. I assume he’s speaking about those kinds of things, but you’d have to ask him," Pompeo said.
In the series of tweets on Sunday, Trump suggested that a 20-mile safe zone could be created to decrease tension between Turkey and the Kurds, a group that's been a critical U.S. partner in the fight against ISIS but which Ankara views as terrorists.

Starting the long overdue pullout from Syria while hitting the little remaining ISIS territorial caliphate hard, and from many directions. Will attack again from existing nearby base if it reforms. Will devastate Turkey economically if they hit Kurds. Create 20 mile safe zone….

….Likewise, do not want the Kurds to provoke Turkey. Russia, Iran and Syria have been the biggest beneficiaries of the long term U.S. policy of destroying ISIS in Syria – natural enemies. We also benefit but it is now time to bring our troops back home. Stop the ENDLESS WARS!

Asked about the president's tweets, Pompeo told reporters, "The president’s aim there, I think, is the one that we have been talking about for some time, which is that we want to make sure that the folks who fought with us to take down the caliphate in ISIS have security, and also that terrorists acting out of Syria aren’t able to attack Turkey. Those are the twin aims."
"And so the precise methodology which by we will achieve that – that security for both of those elements along that border – is something we’re still working on. And so if we can get a space – call it a buffer zone, others might have a different name for it – if we can get the space and the security arrangements right, this will be a good thing for everyone in the region," he continued.
Trump also discussed the idea by phone with Turkish President Recep Tayyip Erdogan on Monday, according to a Turkish readout of the call. The White House readout did not mention the safe zone specifically, but said, "The President expressed the desire to work together to address Turkey’s security concerns in northeast Syria while stressing the importance to the United States that Turkey does not mistreat the Kurds and other Syrian Democratic Forces with whom we have fought to defeat ISIS."
Prior to Monday's phone call, a spokesman for Erdogan responded to Trump on Twitter, saying, "Turkey expects the US to honor our strategic partnership and doesn't want it to be shadowed by terrorist propaganda" and vowing to fight Kurdish groups it equates as no different than ISIS.
The need for Pompeo to clarify Trump's comments comes amid growing confusion regarding the U.S. troop withdrawal from Syria. In December, Trump asserted that the fight against ISIS was over, and he would pull approximately 2,000 U.S. troops out of Syria within 30 days.
But after an outcry from U.S. partners and allies and a series of high-level resignations over the decision, top administration officials, including Pompeo, have said the withdrawal has no timeline and is conditions-based, including the enduring defeat of ISIS, protection for the Kurds, and assurance that Iran can't increase its influence in the region.
Two U.S. officials confirmed to ABC News on Friday that some equipment had been moved out of Syria, but no troops. And a Department of Defense statement said the withdrawal "is not subject to an arbitrary timeline" and that the U.S. would "continue to pursue ISIS in the last remaining space they currently influence."
In the United Arab Emirates on Saturday, Pompeo called the withdrawal a "tactical change" that wouldn't massively affect U.S. efforts in the region.
American troops will remain in Iraq, and Trump has suggested as recently as Sunday that they could "attack again from existing nearby base" if ISIS or another terrorist group emerged.
Pompeo defends U.S., Saudi relationship amid Khashoggi investigation
Pompeo's visit to Saudi Arabia on Monday marked the second-to-last stop in his week-long tour of the Middle East in which he has worked to reassure nations about America's role there.
In Riyadh, the secretary had a one-on-one meeting with Crown Prince Mohammed bin Salman, in which Pompeo said they discussed human rights issues in the kingdom, including the October murder of Washington Post journalist Jamal Khashoggi by Saudi nationals.
The secretary declined to comment on the CIA's reported assessment that the crown prince had ordered Khashoggi's killing, which took place in the Saudi consulate in Istanbul.
Last month, some influential Senate Republicans, including then-Senate Foreign Relations Chairman Sen. Bob Corker, said after a CIA briefing that there was no question that the crown prince had "ordered" the murder.
Since the murder, Pompeo and now-former Defense Secretary James Mattis had argued the importance of America's strategic relationship with Saudi Arabia in terms of countering Iranian malign influence in Syria and Yemen when speaking about Khashoggi's case.
"The Saudis are friends, and when friends have conversations, you tell them what your expectations are," Pompeo told reporters. "And I think the Trump administration has made clear our expectation that all of those involved in the murder of Khashoggi will be held accountable. So we spent time talking about human rights issues, the Khashoggi case in particular."
Pompeo said the crown prince and King Salman "acknowledged that the accountability needed to take place" but he did not receive additional assurances from Saudi leaders about the case.
"They still are working through their fact-finding process," he said. "You should know that the United States continues to work through its fact-finding process as well."
Copyright © 2019, ABC Radio. All rights reserved.

Out of the Shadows: Christopher Steele defiant on dossier, says Trump still ‘potential’ threat
Biden embraces Trump accords, but struggles with his withdrawal from Iran nuclear deal amid growing threat
Trump must give videotaped deposition in protest lawsuit, judge orders
Ellen Pompeo teases what to expect when Kate Walsh returns to ﻿’Grey’s Anatomy﻿’ tonight
White House pushes for release of Jan. 6 documents as Trump, Bannon rebuff committee
Ellen Pompeo reveals what it was like to reunite with Kate Walsh on ‘Grey’s Anatomy’