From Oct. 1 to Dec. 31, state police seized about 224 pounds of cocaine and 26 pounds of heroin. They also confiscated almost 50 pounds of fentanyl.

By far, the drug with the largest combined street value that was seized was 135 pounds of methamphetamines, worth about $5.5 million. That was followed by cocaine for a little over $4 million and liquid THC at about $3.4 million.

Throughout the entire year, state police say they confiscated more than $66 million of drugs.

A large amount of that was heroin and fentanyl, part of the opioid crisis that continues to plague Pennsylvania and the rest of the country.

The Pennsylvania State Police announced that troopers confiscated $16,982,054 worth of cocaine, methamphetamines, heroin, fentanyl, and other prohibited drugs in the fourth quarter of 2018.

From October 1 through December 31, state police seized nearly 224 pounds of cocaine and 26 pounds of heroin. Troopers also confiscated almost 50 pounds of fentanyl. In its purest form, even a small amount of fentanyl can cause a severe and potentially deadly reaction, putting users, people close to them, and first responders at risk. The illegal opioids have a combined street value of $1,498,430.

In 2018, The Pennsylvania State Police removed over $66 million in prohibited drugs from the highways and communities of the commonwealth, including 197 pounds of heroin and fentanyl.

The Pennsylvania State Police remains an integral part of the Opioid Command Center, working to fight the heroin and opioid crisis as part of Governor Tom Wolf’s disaster declaration. 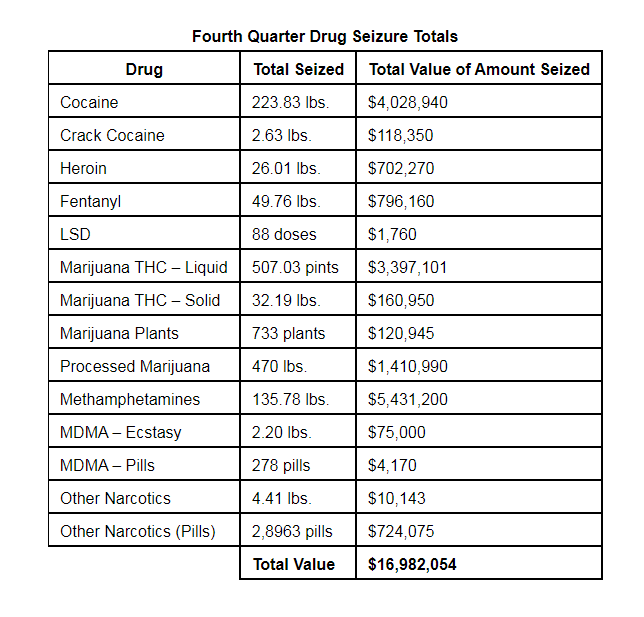