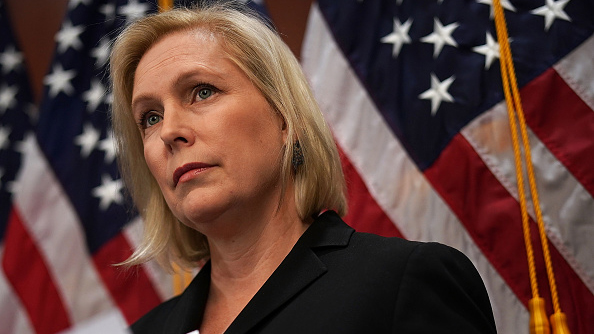 Alex Wong/Getty Images(NEW YORK) — Democratic Sen. Kirsten Gillibrand is taking steps toward a 2020 presidential bid.
The New York Democrat announced that she is forming a presidential exploratory committee Tuesday night during a taping of CBS’ “The Late Show with Stephen Colbert.”
"I’m going to run for president of the United States because, as a young mom, I’m going to fight for other people’s kids as hard as I would fight for my own. Which is why I believe that health care should be a right and not a privilege,” she told the late-night host. “It’s why I believe we should have better public schools for our kids because it shouldn’t matter what block you grow up on. And I believe that anybody who wants to work hard enough should be able to get whatever job training they need to earn their way into the middle class.”
Gillibrand is the third woman to throw her hat in the ring for president. Rep. Tulsi Gabbard of Hawaii and Sen. Elizabeth Warren of Massachusetts have taken steps toward a 2020 run in recent days.
Once considered a moderate Democrat, Gillibrand was first elected to Congress in 2006 and represented a rural Republican district in upstate New York. In 2009, she was appointed to finish then-senator Hillary Clinton’s term when former President Barack Obama nominated her as secretary of State.
Gillibrand has used her time in the Senate to push a more left-leaning agenda.
In 2010 she championed the repeal of “Don’t Ask Don’t Tell” policy that banned gay men and lesbians from serving in the military. Over the past couple of years, she has opposed President Donald Trump’s nominees for his cabinet and other senior government roles including voting against Justice Brett Kavanaugh’s confirmation to the Supreme Court.
Gillibrand’s team paints her as a candidate that can reach across the aisle and be a unifying voice. A campaign official lauded her electoral victories where she earned more than half of the votes in predominantly rural counties that voted for Trump in 2016.
During her most recent re-election bid in 2018, Gillibrand denied having presidential ambitions. In a debate hosted by ABC News affiliate WABC-TV Republican opponent, Chele Farley cited out of state trips, including one to New Hampshire, as proof that she was thinking of running.
Gillibrand replied, “I will serve my six-year term.”
But a week after her successful re-election, she said on ABC’s “The View” that she was considering a 2020 run.
“But that’s a very important moral question that I’ve been thinking about … what president is putting into this country is so disturbing, so divisive, so dark, that I believe I’ve been called to fight as hard as I possibly can to restore that moral integrity, that moral decency. So I’m thinking about it,” she said.