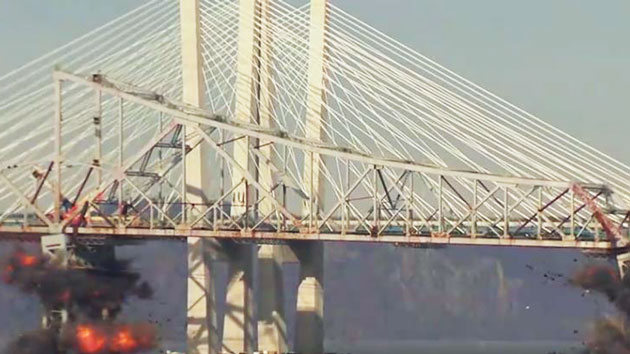 ABC News(NEW YORK) — It spanned the Hudson River for 64 years, but on Tuesday, one of the last remnants of the Tappan Zee Bridge came down in just five seconds.
At 10:52 a.m., dynamite charges went off, destroying steel support pillars at each end of the 672-foot section of the bridge. It plummeted down 142 feet in one piece into a giant net set up in the frigid waters below. Traffic on the new Governor Mario M. Cuomo Bridge nearby was stopped in both directions during the explosive demolition.
Spectators who had gathered on both sides of the Hudson cheered, but some who had fond memories of driving across the bridge were left with mixed feelings.
"It was kind of sad," one woman who grew up with the bridge told ABC station WABC-TV in New York.
"Excellent," another not-so-sentimental spectator said.
The old Tappan Zee opened on Dec. 14, 1955, and was featured in several movies, including "Unfaithful" in 2012 and "Butterfield 8" in 1960, which starred Elizabeth Taylor. Tuesday's demolition leaves just one piece of the Tappan Zee near the Rockland County side of the river left to be demolished.
The Tappan Zee has been replaced by a new cable-stayed bridge that opened in 2017 and cost $4 billion to build. The new 16,368-foot Cuomo Bridge was named after the longtime politician and father of New York's current governor. Mario Cuomo died in January 2015. The old bridge was named after the Native American Tappan tribe and "zee," the Dutch word for "sea."
Demolition workers had initially planned to dismantle the old section of the Tappan Zee piece by piece to protect Hudson River fish and other wildlife. But workers heard popping noises coming from the section in September and determined it had become unstable.
Officials said explosive charges were set off to bring the section straight down to prevent it from damaging the new span.
"Through extensive engineering analysis, it has been determined that this is the safest method to proceed with lowering the span given its current state," Tappan Zee Constructors, the company demolition the bridge said in a statement.
For some spectators, the bridge's collapse was worth toasting. A local catering hall offered a champagne breakfast so people could watch the demolition, WABC reported.

Man who jumped off bridge to save 2-year-old girl honored by Thunderbirds
Boat explosion at Lake of the Ozarks injures 6 people, including 3 minors
Bison Bridge over Mississippi River could be boon for the heartland
Sen. Langerholc calls for more transparency on bridge toll bill
Trump shuts down short-lived blog section of his website
Eight injured in Colorado steel mill explosion: A ‘rare’ event, fire department says