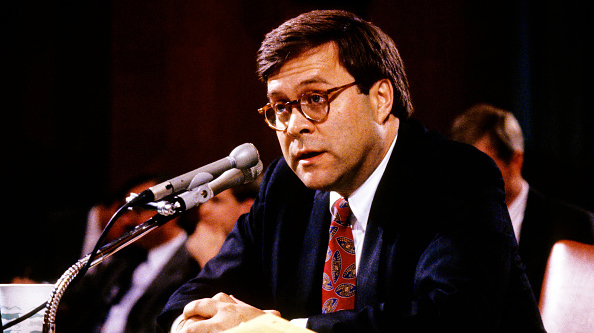 Ron Sachs/Consolidated News Pictures/Getty Images(WASHINGTON) — When William Barr opened his remarks to the Senate Tuesday as he sought confirmation to become the 85th attorney general, he pointedly took time to reflect on his friendship with the man who could easily become his most consequential employee, special counsel Robert Mueller.
“I have known Bob Mueller for 30 years,” Barr said. “We worked closely together throughout my previous tenure at the Department of Justice under President Bush. We’ve been friends since. And I have the utmost respect for Bob and his distinguished record of public service. And when he was named special counsel, I said his selection was ‘good news’ and that, knowing him, I had confidence he would handle the matter properly. And I still have that confidence today.”
While Barr and Mueller have different backgrounds, they followed overlapping routes into the Justice Department. In 1990, when Mueller became the assistant attorney general for the criminal division, Barr was appointed deputy attorney general and then attorney general the following year.
One emphasis of Tuesday’s senate confirmation was the significance of the future dealings between these two men.
With Mueller engaged in a politically sensitive investigation, Barr will assume a central role in the process. Barr’s approval would be needed if Mueller seeks to bring an indictment. And when Mueller writes a report, rules governing the special counsel would demand he deliver it to Barr.
What happens to it next would be Barr’s prerogative.
On Tuesday, as senators pressed Barr over how he may handle the Mueller probe, Barr at times sounded like he was in Mueller’s corner.
For example, Barre dismissed the notion that the Mueller probe was, as Trump has said repeatedly, a “witch hunt.”
"I don't believe Mr. Mueller would be involved in a witch hunt," he said.
And when asked directly by Senator Chris Coons (D-Delaware) if he would fire Robert Mueller if President Trump directed him to do so, Barr said he wouldn't "without good cause."
"I would not carry out that instruction," he said.
Friends and former colleagues of both men say that if history is any guide, the two should have a cordial, professional, even friendly rapport.
George Terwilliger, who worked side-by-side with Barr as his deputy attorney general, said he has known both Mueller and Barr for 30 years. From 1990 to 1993, all three were colleagues at the Justice Department. “We were all close at DOJ, professional friends, more than acquaintances. Back then it was not unusual for us to socialize together,” Terwilliger told ABC News.
Terwilliger described Mueller and Barr’s relationship as one of “mutual profession respect” with no animosity, but he does not think they are close personal friends.
John Smietanka, who served as assistant to the attorney general during Barr’s first tenure at DOJ, and later as principal associate deputy attorney general, told ABC News that if Barr gets confirmed, he expects Barr and Mueller to have a strong rapport.
"I have great confidence in both of them, that they are able to handle this relationship as professionally as the last time they were working together," Smietanka said. "I expect it will be professional, because I know that Bill will make it professional."
Larry Urgenson, a former chief of the DOJ's fraud section, said he believes both men would approach the job “with an apolitical objective to enforce the law.”
“They share a very strong affection for the Department of Justice as an institution,” Urgenson said.
Michael Carey, another former Justice Department official who worked with Mueller and Barr in the early 1990s, told ABC News that “Bill relied on Bob’s input for many aspects of the operation.”
Carey said they worked extremely well together and “their dealings were the product of mutual respect.” Carey described Barr as a highly principled and thorough attorney, who took into account various opinions, especially Mueller’s.
Beyond working together, Barr and Mueller have remained in each other’s orbit during their long stints in private law practice in Washington. Their wives are part of the same Bible study group, Terwilliger said.
“The wives see each other more than we do,” said Terwilliger. “I don’t know that Bill [Barr] socializes with Bob [Mueller],” he added.
On Tuesday, Barr testified that he was transparent with Trump about his relationship with Mueller.
“I told him how well I knew Bob Mueller and that the Barrs and Muellers were good friends and would be good friends when this was all over,” Barr said.
“Bob is a straight-shooter and should be dealt with as such,” he added.