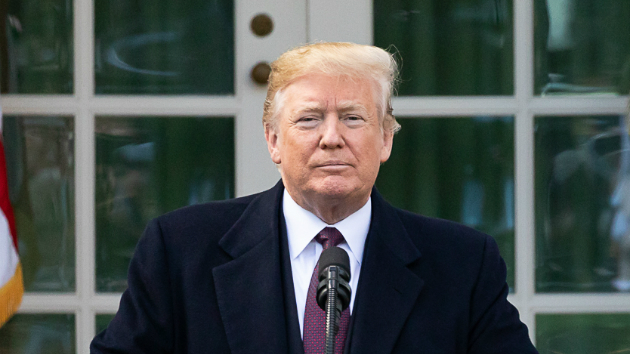 Official White House Photo by Andrea Hanks(WASHINGTON) — Native American leaders are calling on President Donald Trump to apologize for comments he made on Twitter invoking the Wounded Knee Massacre and the Battle of Little Bighorn that he made while attacking Sen. Elizabeth Warren on Sunday.
Trump made fun of an Instagram video Warren released on New Year's Eve in which she drank a beer on camera. He tweeted, “If Elizabeth Warren, often referred to by me as Pocahontas, did this commercial from Bighorn or Wounded Knee instead of her kitchen, with her husband dressed in full Indian garb, it would have been a smash!”
The National Congress of American Indians condemned the remarks, saying the memory of the two events, in which hundreds of Native Americans were killed by U.S. Army soldiers, should not be used as a “rhetorical punch line.”
“We condemn in the strongest possible terms the casual and callous use of these events as part of a political attack. Hundreds of Lakota, Cheyenne, and Arapaho people lost their lives at the hands of the invading U.S. Army during these events, and their memories should not be desecrated as a rhetorical punch line,” Jefferson Keel, the NCAI’s president, said in a statement released Monday.
Rodney Bordeaux, chairman of the Rosebud Sioux Tribe, criticized the president for what he called a “racist and disrespectful tweet about this brutal incident.”
“President Trump should remember that the United States has broken and continues to dishonor the treaties of peace made with our nation and other tribal nations of this country, and he should apologize immediately to the people of the Rosebud Sioux Tribe and other Lakota, Dakota, and Nakota nations for his shameful and ignorant misstatement,” Bordeaux added.
Warren has come under fire for her handling of the question of whether she could claim Native American ancestry, even taking a DNA test last year in an effort to prove her ties to the Cherokee Nation.
Trump has insulted Warren on several occasions by deriding her as “Pocahontas” and making fun of her DNA test results, which indicated she had between 1/32nd and 1/1024th Native American ancestry.
Copyright © 2019, ABC Radio. All rights reserved.