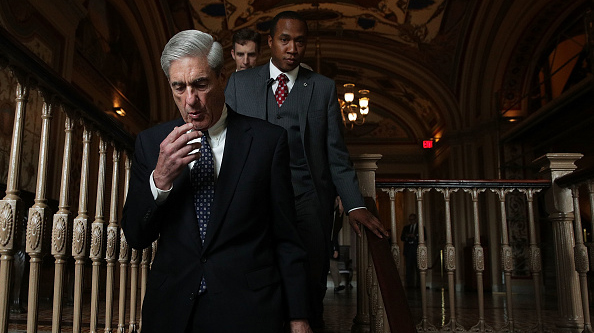 Alex Wong/Getty Images(WASHINGTON) — Special counsel Robert Mueller has zeroed in on at least three new witnesses associated with a conservative commentator connected to former Trump campaign adviser Roger Stone, signaling that investigators remain focused on the activities of Stone and his associates despite the continued public silence on a matter long thought to be close to resolution.
ABC News has learned that at least three new witnesses connected to Stone associate Jerome Corsi – the former Washington, D.C., bureau chief for the far-right internet site Infowars – have been subpoenaed to testify before a federal grand jury hearing testimony on the investigation into Russian interference in the 2016 election.
Copies of those subpoenas delivered to two individuals late last year bear Mueller’s name and call for the retention and producing of documents, communication logs and other records involving two people: Corsi and Stone.
The two individuals, whose names have not been publicly released, also testified before Mueller’s grand jury in December, according to the subpoenas and three sources who confirmed their attendance.
This week Corsi made public the identity of a third witness, who was served a subpoena last Friday — Corsi's stepson Andrew Stettner, who is scheduled to testify before the grand jury this Friday. When reached by ABC News, Stettner’s lawyer David Gray, who also represents Corsi, declined to comment on the matter.
Corsi has been vocal in his objections to the continued push by Mueller.
“It’s clear Mueller and company now hate me,” Corsi told ABC News on Tuesday. “I’m calling him out as a crooked prosecutor.”
A spokesperson for the special counsel declined to comment.
Corsi said that Stettner was questioned by the FBI in recent weeks because he has, on and off over the course of many years, helped fix Corsi's computers. Of particular interest to the FBI agents, Corsi said, was a computer of his that Stettner wiped of all its contents in the weeks leading up to Corsi’s subpoena to testify before the special counsel's grand jury in late August.
Corsi and his wife, Monica Corsi told ABC News in a recent interview following Stettner's encounter with the FBI that Stettner wiped the computer because Monica Corsi wanted to use the computer for her New Jersey-based small business, rather than buy a new one. He said neither he nor his wife had nefarious intentions.
“I don’t see how I can be accused of destroying evidence or a conspiracy to obstruct justice when I simply allowed – before I knew I was under investigation — my stepson to restore a computer,” Corsi told ABC News. “I didn’t see the harm in wiping [the computer] instead of buying a new one.”
Corsi, known for promulgating political smear campaigns and conspiracy theories, rejected a plea deal he says was offered to him by Mueller in November, saying he could not sign on to a plea deal for a crime he says he did not commit.
The agreement would have allowed Corsi to plead guilty to one count of lying to federal investigators about communications with an unidentified “associate’s request to get in touch with an organization that he understood to be in possession of stolen emails and other documents pertaining to the 2016 U.S. presidential election,” according to a draft of the plea agreement Corsi provided to reporters.
That unknown associate mentioned by Mueller matches the description of Roger Stone, who hired Corsi to do research for him during the 2016 election.
Stone has been under scrutiny from the special counsel in part because of statements he made in August of 2016 which critics allege suggest he knew that WikiLeaks was going to leak damaging information on Clinton before it was released.
In an email exchange from the summer of 2016 reviewed by ABC News, Stone and Corsi appeared to communicate about ways to contact Julian Assange, the controversial WikiLeaks founder, about the imminent release of information meant to damage Hillary Clinton’s campaign for president.
Stone said in a statement to ABC News on Tuesday, “Any Claim that Jerry Corsi told me the source or content of either allegedly stolen or allegedly hacked e-mails published by Wikileaks or provided me copies of any such material is both categorically false and easily disproved. It's unfortunate that the limited e-mails between us on this subject have been willfully mischaracterized in terms of both their meaning and legal significance."

Ahead of Father’s Day, Chris Pratt reveals what new baby Lyla has taught him
One dead, one injured after car plows into protesters in Minneapolis, police say
Ahead of its second-season premiere, Jason Momoa’s ‘See’ gets third season renewal on Apple TV+
Biden, Johnson strike friendly tone ahead of G-7 summit
Schools forge ahead without CDC guidance, some leaning away from masks
Voting rights legislation sits in Congress while states move ahead with reforms