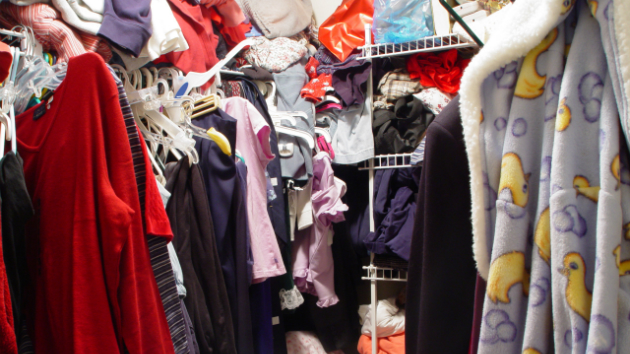 Home organization guru Marie Kondo has sparked an international phenomenon with her KonMari method of tidying up. Her process is based on figuring out which possessions “spark joy” in you, and getting rid of the rest.

Kondo is the star of a new Netflix series, The Life Changing Magic of Tidying Up, in which she travels across the U.S. to teach American families how to get organized. She previously published a book by the same name in 2014.
Spoiler alert: getting organized does not just mean cleaning, sorting, and putting your things away. It is also about deciding what you need and love.

One in 11 Americans have so many possessions that they pay for storage space outside their home, according to the Self Storage Association. Recent scientific research backs up the KonMari method, and shows that having too many things in your home may not only make it difficult to find your keys, but significantly impact how you feel.
Increased stress
In 2009, researchers at UCLA found that mothers who described their homes as “cluttered” had a stress hormone profile indicative of chronic stress. These moms also tended to have a more depressed mood throughout the day, were more tired in the evenings and had a difficult transition from work to home.

Decreased focus and productivity
Princeton researchers published an article in the Journal of Neuroscience in 2011 that found in a cluttered visual environment, multiple objects compete for your attention, leading to poor focus. Clutter is distracting, and a person’s ability to be productive suffers.
Unhealthier eating

In a 2016 joint Australian-U.S. study, college students were twice as likely to reach for sugar-rich foods when they were stressed in a messy kitchen. Researchers found that the combination of feeling vulnerable and being left in a chaotic environment led to more unhealthy eating habits.

Decluttering is easy…but difficult too
Clutter accumulates for many reasons. A study published in The Journal of Obsessive-Compulsive and Related Disorders in 2015 about our motives for collecting objects suggests that people have strong emotional attachments to their belongings. Those belongings can serve as a source of comfort, an extension of self and sentimental reminders of life events. People are also concerned about waste, and fear that they will lose or forget things if they are discarded.

Interestingly, a 2017 study published in The Journal of Marketing showed that people are more willing to part with their possessions if they were able to keep its memory by photographing it. A box of old toys is easier to part with if there is a memento.
Decluttering — a trend centuries in the making
Despite recent “declutter” trends, the act of purging one’s possessions can be found throughout history. The idea of “spring cleaning” has been practiced for centuries around the world, sometimes in preparation for a new year, as in China and Iran, and often linked to religious practice such as Clean Week prior to Lent in Catholicism or Passover in Judaism.
Copyright © 2019, ABC Radio. All rights reserved.