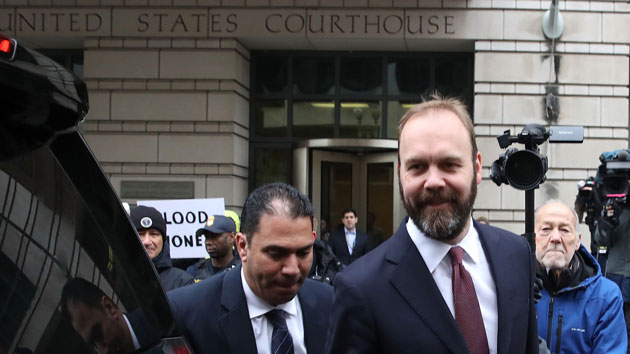 Mark Wilson/Getty Images(WASHINGTON) — Rick Gates, a former Trump campaign official and longtime business associate of Paul Manafort, is still cooperating with special counsel Robert Mueller, suggesting Mueller's investigation into Russian meddling during the 2016 campaign is marching forward.
A joint status report filed Tuesday states that Gates “continues to cooperate with respect to several ongoing investigations, and accordingly the parties do not believe it is appropriate to commence the sentencing process at this time.”
Gates pleaded guilty in February 2018 to charges of conspiracy against the U.S. and lying to federal authorities about his work prior to joining the Trump campaign with Manafort, who served as the campaign's chairman for six months in 2016. The charges were brought by Mueller as part of his investigation into Russian interference during the 2016 presidential election.
Gates’ plea agreement has precipitated nearly a year of cooperation in the special counsel’s probe. His crimes carry a maximum penalty of more than five years in prison, but Gates could earn a lesser sentence if a judge deems his cooperation worthy of leniency.
The extent and content of Gates’ cooperation remain largely unknown. The next status update is due March 15.
The special counsel’s office indicted Gates and Manafort twice. The first round of charges in Washington, D.C., in the fall of 2017 contained 12 counts of conspiracy, foreign agent registration violations, and other crimes. A second round of charges filed in Virginia months later centered around Manafort and Gates’ past lobbying and financial activities, including tax fraud and money laundering.
Both initially pleaded not guilty, but Gates succumbed to the mounting legal and financial pressure in February 2018 and struck a plea deal with prosecutors.
Manafort fought the Virginia charges at trial in August, where a jury found him guilty on eight counts of tax and financial crimes.
During that trial, Gates testified against his former boss, describing to jurors his role in hiding millions of dollars in more than a dozen offshore accounts from United States tax collectors, adding that he did so at Manafort's direction. Gates also admitted to embezzling "several hundred thousand" dollars from Manafort.
Ahead of a second trial in Washington in September, Manafort struck a plea agreement of his own. That deal fell apart within weeks after prosecutors accused him of lying.
Manafort is scheduled to face sentencing in the Virginia case in February.
Copyright © 2019, ABC Radio. All rights reserved.