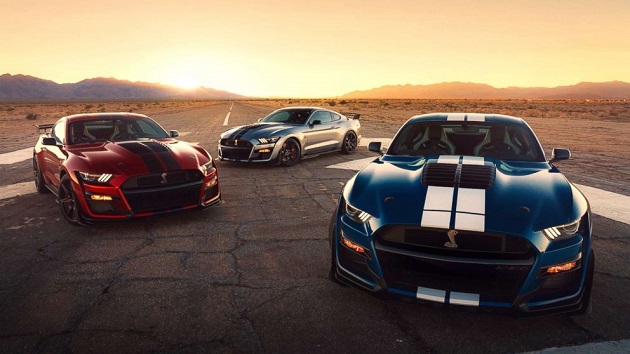 Ford Motor(DETROIT) — European supercars, you've met your match.
Ford Motor on Monday debuted its new 2020 Mustang Shelby GT500 sports car — the fastest and most advanced street-legal vehicle ever produced by the Dearborn, Michigan, automaker.
The hand-built, 5.2-liter aluminum alloy supercharged V8 engine turns out 700-plus horsepower and is "capable of mid-three-second 0-60 mph and sub-11-second quarter-mile scores," according to Ford. The GT500 also boasts an adjustable exposed carbon fiber GT4 track wing.
The Ford Performance team said it inverted a 2.65-liter roots-type supercharger with air-to-liquid intercooler into the V8 engine valley to keep the intake air cooler and deliver a lower center of gravity.
The 7-speed dual-clutch transmission can shift in under 100 milliseconds and includes several drive modes: normal, weather, sport, drag and track.
“With its supercar-level powertrain, the all-new Shelby GT500 takes the sixth-generation Mustang to a performance level once reserved only for exotics,” Hermann Salenbauch, global director, Ford Performance vehicle programs, said in an announcement. “As a Mustang, it has to be attainable and punch above its weight. To that end, we’ve set a new standard among American performance cars with our most powerful street-legal V8 engine to date, plus the quickest-shifting transmission ever in a Mustang for all-out precision and speed.”
Carroll Shelby, the legendary American race car driver, crafted the first-generation Shelby GT500 in 1967 with a modified 428-cubic-inch V8, inspired by his team’s 1-2-3 finish at Le Mans.
According to Ford, Shelby called the original GT500 “the first real car I’m really proud of.”
Ford did not announce pricing for the new Mustang but said the pony car will be available in showrooms this fall.
Bill Ford Jr., whose grandfather, Henry Ford, founded the company 115 years ago, reportedly has more than a dozen Mustangs in his personal car collection. He told ABC News in 2018 that no one imagined the Mustang would “create such a dedicated base of fans around the world” and still be in production today when it debuted at the New York World Fair in April of 1964.
The Mustang has been the best-selling sports car in the U.S. for the last three years.
Ford also introduced two new SUVs at the North American International Auto Show in Detroit: The Explorer ST, part of Ford Performance, and an Explorer Hybrid.
Copyright © 2019, ABC Radio. All rights reserved.