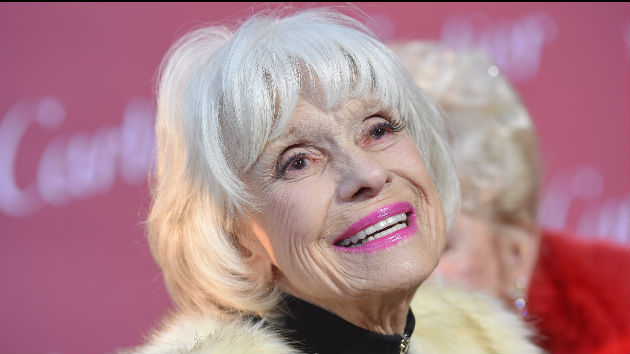 Photo by Axelle/Bauer-Griffin/FilmMagic
Posted on January 15, 2019 by ABC News

Photo by Axelle/Bauer-Griffin/FilmMagic(LOS ANGELES) — Tony-winning and Oscar-nominated actress Carol Channing has died at 97 years old. She was sixteen days shy of her 98th birthday.

Her agent says the woman who originated the role of Mrs. Dolly Gallagher Levi in Hello, Dolly! on Broadway passed away of natural causes at 12:31 a.m., at her home in in Rancho Mirage, California.

Born in 1921 in Seattle and raised in San Francisco, Channing attended Vermont's Bennington College majoring in drama and dance. She made her Broadway debut in 1948 and made a splash in 1949 as Lorelei Lee in Gentlemen Prefer Blondes. Her best-known role, however, was that of Dolly Levi in Hello, Dolly!, for which she won the Tony Award in 1964. She played the role in over 5,000 performances. Channing also received a 1995 Lifetime Achievement Tony Award.

In response to news of her death, the company of Hello, Dolly released the following statement: "We are deeply saddened by the passing of the one and only Carol Channing. She was a 'Dolly' for the ages, and a true icon of the American Theater. Betty Buckley and the cast will dedicate tonight's performance in San Diego to her memory."

Channing's movie roles included her Oscar-nominated turn as Muzzy in Thoroughly Modern Millie; of note, she gave Clint Eastwood his first on-screen kiss in the film The Traveling Saleslady. She made numerous TV appearances on her own TV specials, on variety shows like The Carol Burnett Show, on game shows like Password and Hollywood Squares, and on more recent fare like The Nanny, The Drew Carey Show, Touched by an Angel, and Family Guy.

On the music front, Channing recorded numerous albums, ten of which went Gold, including the original cast album of Hello, Dolly! In 2003, she released her memoir Just Lucky I Guess and toured worldwide with a one-woman show called The First Eighty Years are the Hardest.

Channing also ad one of the most distinctive voices in showbiz, and did narration and voiceover work for many projects.

In 2012, she was the subject of a documentary called Carol Channing: Larger Than Life. Her last public appearance was at a star-studded tribute on her 95th birthday.