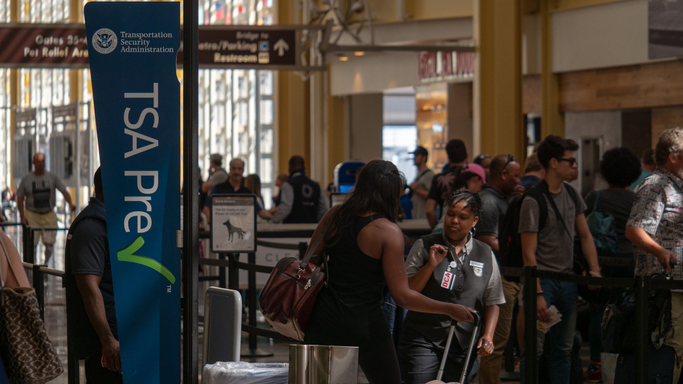 David Tran/iStock(WASHINGTON) — Transportation Security Administration officials are closing more security lanes amid increased callouts from officers not being paid during the government shutdown.
The absence rate at TSA on Monday is 7.6 percent, up from 3.2 percent on the same day last year, according to TSA spokesperson Michael Bilello.
Major airports in cities such as Atlanta and Houston "are exercising their contingency plans to uphold aviation security standards." That means condensing TSA officers into fewer checkpoints and screening lanes to uphold security standards at the cost of longer lines.
Queues at Atlanta Hartsfield-Jackson International Airport security extended more than an hour long on Monday morning, causing travelers to miss flights, according to ABC-affiliate WSB-TV.
An Atlanta airport spokesperson told ABC News several security lanes were closed this morning, leading to longer than usual lines. It's unclear if those lanes are reopening for the evening rush.
The security checkpoint at Terminal B in Houston's George Bush Intercontinental Airport is also closed. Passengers are forced to go through a surrounding checkpoint and then walk or take the train to their gate in Terminal B on the secure side of the airport.
While "mission critical" federal employees continue to go to work during the government shutdown, they are, for the first time, missing a paycheck. Airport screeners, air traffic controllers and many FAA inspectors and engineers did not get paid this week despite going to work.
Flights are still taking off on time and air traffic controllers had to tackle a major winter storm from the Midwest to the East Coast this weekend, canceling hundreds of flights and thousands of delays.
As a show of solidarity, a number of air traffic controllers in Canada have banded together to send pizza to their American counterparts amid payment freeze.
ABC News saw employees of Ronald Reagan Washington National Airport on Monday delivering donuts and words of encouragement to TSA officers at a security checkpoint. TSA officers are not allowed to accept gifts from companies or passengers but can accept donations like meals from the airport.