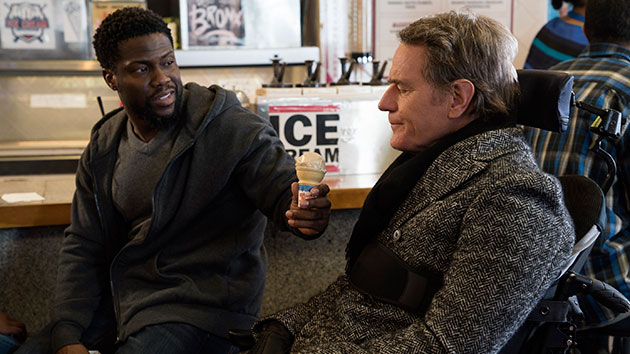 Kevin Hart and Bryan Cranston in "The Upside"; David Lee/STX Films(NEW YORK) — The Upside pulled off a major upset, dethroning Aquaman to win the weekend box office with an estimated $19.59 million — double its top pre-release estimate. The remake of the French comedy The Intouchables, which stars Kevin Hart and Bryan Cranston, also gives studio STX Entertainment its first-ever number-one debut.

Aquaman, which was expected to the number-one film for the fourth time in as many weeks of release, dropped to second with an estimated $17.26 million weekend. However, there's still reason for celebration: It's now the first film in the DC Extended Universe to top $1 billion worldwide, and ranks as the second-highest-grossing film globally among DC Comics adaptations, behind 2012's The Dark Knight Rises with $1.0849 billion.

Fourth place belongs to Spider-Man: Into the Spider-Verse, which earned an estimated $9 million. The animated adventure is on track to unseat Hotel Transylvania as Sony Animation's third-highest-grossing domestic release of all time. Overseas, Spider-Verse tacked on an estimated $9.4 billion, bringing its worldwide totals to more than $300 million.

Escape Room rounded out the top five, delivering an estimated $9 million in its second week of release.

The weekend's other new major release, Keanu Reeves' Replicas, only managed to bring in an estimated $2.5 million, earning it the dubious honor of being the worst-ever opening for a film debuting in over 2,000 theaters.