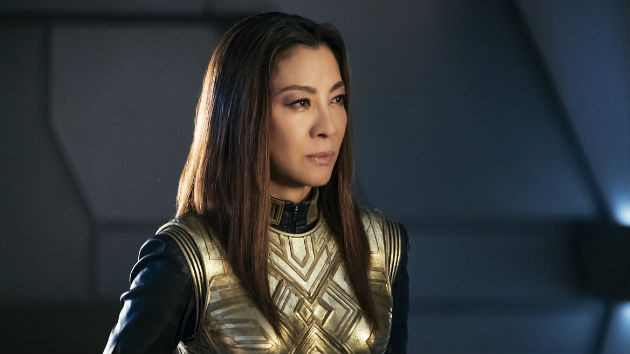 The Crazy Rich Asians star, who plays Captain Philippa Georgiou, a member of Starfleet's mysterious Section 31, on Discovery, will take center stage in the CBS All Access project.

"I’m so excited to continue telling these rich Star Trek stories," the actress and martial artist said in a statement. "Being a part of this universe and this character specifically has been such a joy for me to play. I can’t wait to see where it all goes — certainly I believe it will go 'where no WOMAN has ever gone before!'"

For his part, executive producer Robert Kurtzman said of Yeoh, "As a human, I adore her. As an actor, I revere her…and we’re all thrilled to explore the next wild chapter in the life of Captain Philippa Georgiou."

This project is just the latest in a series of Trek spin-offs announced by CBS All Access. Those include the short form series Star Trek: Short Treks, a comedy series called Star Trek: Lower Decks, and an as-yet untitled series featuring Star Trek: Next Generation star Patrick Stewart reprising his role as Captain Jean-Luc Picard.

Congrats: ‘Queens’ star Eve announces she’s pregnant with her first child
Chris “Ludacris” Bridges says his new animated series ‘Karma’s World’ has the potential to “change the world”
Lifelong Trekkie and Hollywood producer calls William Shatner’s real-life star trek “nothing short of amazing”
Michael Keaton’s new Hulu limited series ‘Dopesick’ is guaranteed to make you angry
‘Harry Potter’ star Tom Felton expresses shock after learning he is not a Slytherin after all
“Beam me up”: NASA Astronauts sound off on William Shatner’s real-life trek to the stars next week