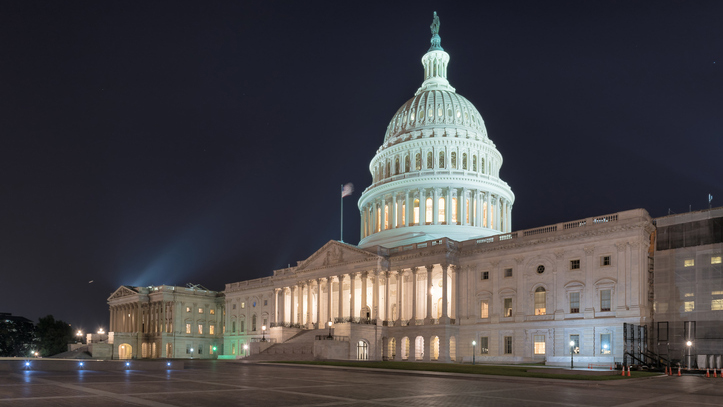 lucky-photographer/iStock(WASHINGTON) — Rep. Steve King, R-Iowa, an eight-term congressman, has been stripped of new committee assignments amid backlash to comments he recently made in a New York Times interview about white supremacy.
Members of the House Republican Steering Committee met Monday evening to consider whether King should be denied committee assignments in the new Congress. King previously served on three committees, and recently served as chairman of the House Judiciary Committee's subcommittee on Constitution and Civil Justice.
“White nationalist, white supremacist, Western civilization — how did that language become offensive?” King asked in an interview with the New York Times.
The comments have drawn condemnation from Democrats and Republicans alike.
In a statement, House GOP Leader Kevin McCarthy called King's remarks "beneath the dignity of the Party of Lincoln and the United States of America."
"His comments call into question whether he will treat all Americans equally, without regard for race and ethnicity … let us hope and pray earnestly that this action will lead to greater reflection and ultimately change on his part," the statement says.
In his own statement, King insists the decision was a "political" one and that the quotes in the New York Times story were "completely mischaracterized." King said the comments were made during a discussion about "the changing use of language in political discourse."
But the remarks were enough to stoke backlash from many of King's fellow Republicans, including the only African-American Republican senator, Tim Scott, who wrote an op-ed in the Washington Post on Friday.
"I will admit I am unsure who is offended by the term 'Western civilization' on its own, but anyone who needs 'white nationalist' or 'white supremacist' defined, described and defended does lack some pretty common knowledge," Scott wrote.
Sen. Mitt Romney, R-Utah, Monday called for King's resignation.
"What he said was reprehensible and ought to lead to his resignation from Congress," Romney told reporters.
Senate Majority Leader Mitch McConnell also issued a stunning rebuke Monday when he said, "If [King] doesn't understand why 'white supremacy' is offensive, he should find another line of work."
Democrats have scheduled a House vote Tuesday on a resolution, introduced by by House Democratic Whip Jim Clyburn, disapproving of his remarks. Two other Democrats – Rep. Bobby Rush and Rep. Tim Ryan — have also introduced censure resolutions, a more forceful reprimand.
Ryan could force a vote on his censure resolution later this week.
King, in a statement on the Steering Committee's decision, appeared determined to stay in Congress and not resign following the intense backlash from party leaders.
"Ultimately, I told him ‘You have to do what you have to do and I will do what I have to do,'" he said of House Republican Leader Kevin McCarthy. "I will continue to point out the truth and work with all the vigor that I have to represent 4th District Iowans for at least the next two years.”
King has always presented himself as an immigration hawk and has been a staunch ally for President Donald Trump. King advocated for building a wall on the southern U.S. border before Trump ran for office and made the wall a signature campaign promise. But King barely won re-election in 2018 and, already, a state senator has announced intentions to run against King in 2020.