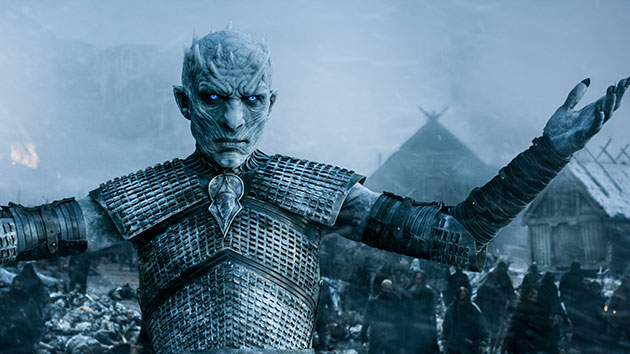 HBO(NEW YORK) — The cold breath of winter searches for the Stark children in the new Game of Thrones teaser, which also finally reveals the premiere date for the hit HBO fantasy drama's eighth and final season.

The teaser opens with Kit Harington's Jon Snow, burning torch in hand, striding through the crypts beneath the Stark ancestral home of Winterfell. He's joined by his sisters, Sansa and Arya — played by Sophie Turner and Maisie Williams, respectively — passing the stone effigies of their dead mother and father, Ned and Catelyn Stark, as their ghostly voices whisper to them.

"All this horror that has come to my family. It's all because I couldn't love a motherless child," Catelyn whispers as Sansa passes.

Jon pauses before the statue of his adoptive father: "You are a Stark," Ned Stark's voice insists. "You not only have my name, you have my blood."

Then at the end of the passage, the trio is shocked to confront stone effigies of themselves, just as an icy fog rolls into the corridor behind them — heralding the imminent arrival of the Night King and his army of undead. Jon, Sansa and Arya turn toward it, with Jon and Arya drawing their swords, ready for the final battle as the fog closes in around them.

Then comes the title card: "Game of Thrones — The final season — April 14."

So there you go. Season eight will consist of six episodes, each of which is expected to run well over an hour in length. Game of Thrones will air Sunday nights at 9:00 ET/PT on HBO.

Treat yo self! Aziz Ansari reveals engagement during comedy set
Trevor Noah to return as host of the 2022 Grammy Awards
‘The Bachelor’ season 26: Clayton Echard announced as new lead
AMC announces ‘Kevin Can F*** Himself’ will end after season 2
Denver still waiting for first snow of season, breaking record
Hurricane season ends with 21 named storms, using all the names for 2nd consecutive year