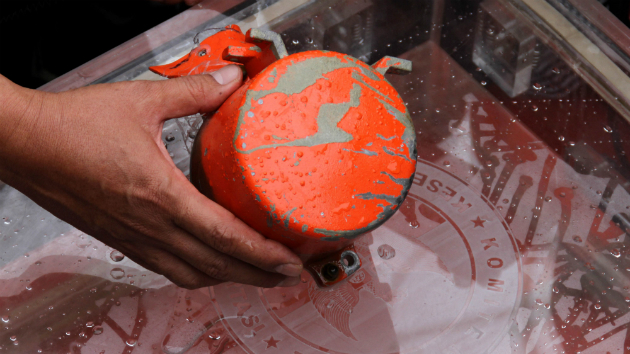 AZWAR IPANK/AFP/Getty Images(JAKARTA, Indonesia) — Indonesian Navy divers recovered a cockpit voice recorder from a missing Lion Air plane that crashed into the Java Sea in October, killing all 189 people on board, officials said Monday.
The device, one of two recorders on the jet, could offer insight into the final moments of the fatal flight as investigators search for clues about why the brand new Boeing 737 Max 8 went down.
Investigators now will work to retrieve data from the so-called black box hoping it will contain audio of the pilots' conversations. The plane crashed in waters nearly 98 feet deep on Oct. 29, just after takeoff.
Officials are expected to offer more details at a press conference later Monday.
Search and rescue officials said they lost contact with Lion Air flight JT610 minutes after it left Jakarta, the country's capital. The cockpit data recorder, recovered days three days after, showed that its airspeed indicator had malfunctioned on previous flights.
The 189 on board included three children and the crew, officials said.
Lion Air is one of Indonesia's largest airlines.