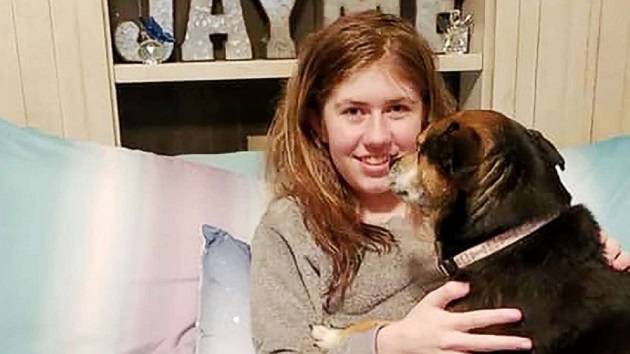 Courtesy Jennifer Smith(NEW YORK) — Robert Naiberg said he could barely speak when police called to tell him that his granddaughter, 13-year-old Jayme Closs, had been found.
"I was overwhelmed. I couldn't talk," Naiberg said on ABC News' Good Morning America Monday. "I was the first one she gave a hug too. I was standing in my daughter Jennifer’s hallway, and she gave me a big hug."
"She hugged everybody that was there — we tried not to overwhelm her," he added.
Jayme escaped and was discovered Thursday, after spending three months in captivity with a man who allegedly abducted her from her Wisconsin home in October and killed her parents, Denise and James Closs, authorities said.
She was found in Gordon, Wisconsin, about 70 miles north of her hometown of Barron. Jake Allard, a cousin who was present for the joyful reunion, said Jayme couldn't stop smiling when she arrived home with her aunt, Jennifer Smith.
"It's unreal how everybody in the afternoon, about four hours, got her room ready for her," Allard told GMA. "When Jennifer and her husband went to pick her up, the room was empty. When they got back, it was all done."
"Jayme's dog was there. He crawled right up on her lap and snuggled up to her," he added.
Smith shared a heartfelt image of Jayme on Facebook Saturday, showing the young girl smiling and cuddling with her dogs.
"Jayme had a pretty good night's sleep," Smith wrote in the post. "It was great to know she was next to me all night. What a great feeling to have her home."
Naiberg said the family recorded video of her parents' funeral for her with hopes that it might give her a bit of closure.
"They taped the funeral for her, but they're not going to show it to her …" Naiberg said. "When she's ready."
Allard, who described Jayme as shy and quiet, said he's worried about how she'll process the tragedy.
"My biggest concern was that she was real close to her mother," Allard said. "Her mother was really good to her. Her dad was too."
Jake Patterson, 21, of Gordon, was arrested and charged with kidnapping Jayme and killing her parents, officials said. He's scheduled to make his initial court appearance on the charges Monday, and his attorney, Charlie Glynn, said it's too early to discuss specifics of the case.
"This is a tragic situation from every perspective," Glynn told GMA. "Lots of heavy hearts, lots of thoughts and prayers going around."
"His feelings and emotions are consistent with what you would expect," he added.
It's unclear if some of Jayme's family will attend the hearing.
"I know I'm not going to go," Allard said. "He has lawyers, and I do not want to listen to them. Anyone who could do something like this deserves a max sentence."