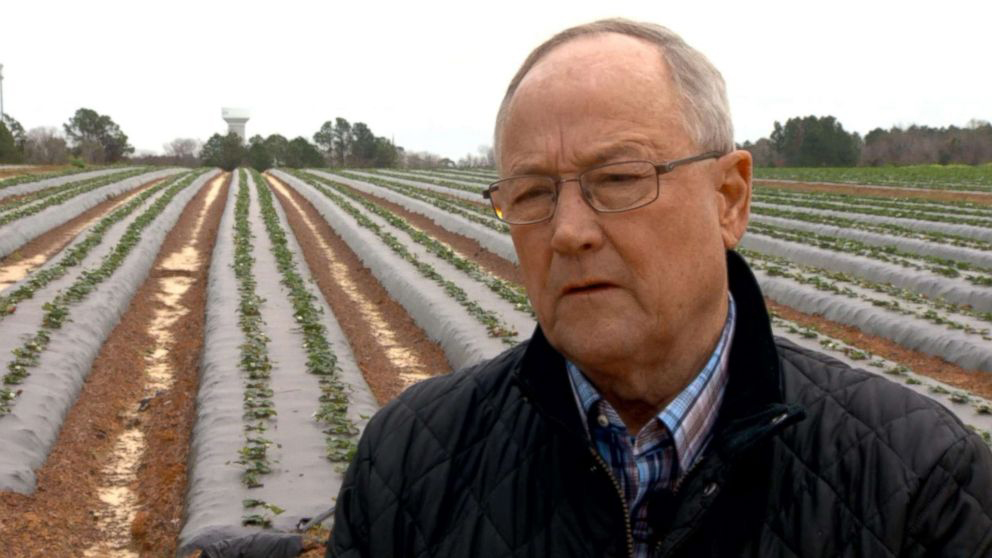 ABC News(WASHINGTON) — South Georgia farmer Bill Brim has been in business more than 20 years.
He told ABC News that farmers in his area were hit hard by Hurricane Michael in October and are now facing even more challenges because of the partial government shutdown.
Brim said his 6,500-acre vegetable farm is not hurting too much because of the shutdown, but the entire area around Tifton, Georgia has had a hard year between the hurricane and an especially rainy season. He said many farmers in the area are still waiting on disaster relief money from the government, which at this point in the shutdown is no longer being processed by the U.S. Department of Agriculture.
"It certainly hurts you. You want to go in, you’ve got to pay rent for your farm if you’re going to farm next year, or if you’re able to farm next year, I should say, then you got to pay your rent to your tenants, you’ve got to be able to buy fertilizer, you got to be able to get all your crops prepared, do everything that you need to do to get ready for growing the crop, just like we’re laying plastic in another field over there, we’re getting ready right now to grow another crop," he told ABC News.
"And fortunately, we have enough of our purveyors out there that are providing us stuff that we have a credit line that we have with them and we take it and try to use it to our benefit right now. Because we're waiting on the funds to come back in."
President Donald Trump addressed the American Farm Bureau's centennial convention on Monday afternoon and mentioned policy changes in the farm bill, regulatory rollbacks like the Waters of the United States rule and renegotiated trade deals that he says will be better for farmers.
But he spent little time discussing the impact on farmers while the USDA is largely closed during the historic government shutdown.
"The USDA is doing everything in its power to help farmers during the shutdown. We thank you for your support and patriotism and we fight to defend our nation," Trump said in New Orleans on Monday.
But the USDA is limited in how much it can do since many of its offices were shuttered when the shutdown began on Dec. 21. Since then farmers have not been able to access resources used to plan the next planting season or apply for loans and aid meant to mitigate the impacts of Trump's trade war with China.
Trump acknowledged that many farmers rely on migrant workers, alluding to his call for border security and saying "we don't want the wrong ones coming in."
Brim said he supports Trump and understands the argument for a border wall to prevent criminals from entering the U.S. But he also worries the wall will make it harder for him to recruit temporary agricultural workers through legal visa programs.
"I use a lot of migrant labor here in my farm. I’m up to 750 at certain times of year and mine are H-2A, I bring them in legally. So I hope that the border wall doesn’t cause us to have to close down the borders so we can’t get our people in here to work," he told ABC News.
"I would just like to say that we need something done now. We need the Democrats and the Republicans to get together and do what's right. Give him the wall if that’s what it takes to get this thing closed down so we can go back to normal — and work for your people."
John Boyd, a soybean farmer from Baskerville, Virginia, told the Washington Post that he was hurt by declining prices as a result of the trade war with China and has been waiting for a check as part of the aid the administration announced to help farmers who lose money because of the tariffs.
"This shutdown is affecting small people like myself, but if it continues, America is going to feel the impact everywhere — grocery stores, small businesses," he told the paper last week. “Right now, I need seed and diesel fuel; I do not need a damn wall. That does not help me in my farming operation."
Agriculture Secretary Sonny Perdue announced that the second round of payments to help farmers with the money that was lost as a result of Trump's trade war with China will be delayed.
The nonprofit organization Farm Aid, which advocates for family farmers, said the group's hotline has received twice as many calls as usual from farmers who can't apply for loans or work with banks to try and save their farm from foreclosure.
"Winter is not time off for farmers; winter is business time. For the USDA to be shut down during this critical time is incredibly stressful for the farmers we hear from every day," the group said in a blog post last week.
Sen. Debbie Stabenow, the top Democrat on the Senate Agriculture Committee, has also raised concerns that USDA can't implement programs authorized in the recently passed Farm Bill until the government reopens.
"Local Farm Service offices all across Michigan are closed and farmers can’t apply for loans they need as they look to next year. We have dairy farmers in very desperate situations. We dramatically increased support for them in the farm bill and they need it now," she said on the Senate floor last week.

Out of the Shadows: Christopher Steele defiant on dossier, says Trump still ‘potential’ threat
Biden embraces Trump accords, but struggles with his withdrawal from Iran nuclear deal amid growing threat
Trump must give videotaped deposition in protest lawsuit, judge orders
Gymnasts call on Congress to dissolve US Olympics board over Larry Nassar case
White House pushes for release of Jan. 6 documents as Trump, Bannon rebuff committee
Timothée Chalamet dodges questions about ‘Call Me By Your Name’ co-star Armie Hammer controversy